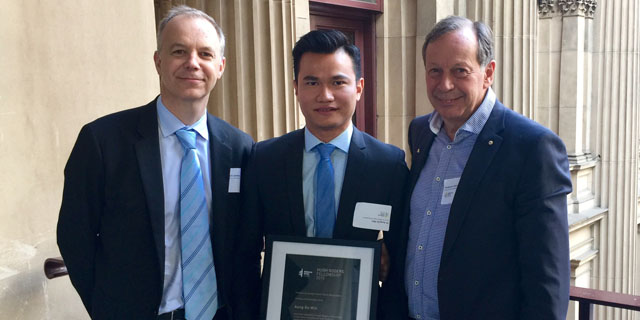 The Hugh Rogers Fellowship is an initiative to promote educational exchange between Melbourne and Boston in medical research, education and the arts. Dr Aung Ko Win will spend two months at Harvard University next year continuing his work in bowel cancer research, focusing on developing a tool to predict bowel cancer risk.

"I want to learn Harvard University's programs for developing models and tools for predicting who is at risk of carrying genetic variants that make people more susceptible to cancer," Dr Win said. "Specifically, I am planning to carry out research in the area of genetics and colorectal cancer."

Strengthening the ties between the University of Melbourne and Harvard University, Dr Win will be working for two months with Professors Giovanni Parmigiani and Sapna Syngal and their teams at Harvard University and the Dana-Farber Cancer Institute on projects towards developing tools for bowel cancer risk prediction.

Dr Win also received the Chancellor's Prize for Excellence in the PhD Thesis in 2015 and has published extensively on his work in bowel cancer research.