Professor Dato’ Dr Khalid Yusoff was a ‘champion of excellence’ in all he did. 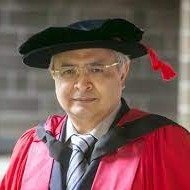 The son of an outward-looking shariah judge, who had spent 13 years studying in Mecca, Khalid and his three brothers were educated in English medium schools and subsequently studied abroad in the UK, USA or Australia. Reflecting the prestige of his secondary school at the Malay College Kuala Kangsar, nine of the twenty Malaysian Colombo Plan scholarships in 1972 went to Khalid and other class scholars. These scholarships were awarded to outstanding students with identified potential for future leadership to pursue undergraduate studies.

Aged 17, Khalid flew to Melbourne via Perth – plunged into mainstream Australia via a Middle Brighton homestay with a Scottish landlady, and enrolment at McKinnon High. Despite the cold, a lack of halal food, an abrupt transition from rote learning, and at times devastating loneliness, Khalid described when interviewed in late 2017 his openness to "an experience in Australia which caused a huge turnaround in my perspective of the world".

He decided to study medicine at the University of Melbourne upon matriculating because "I wanted to do the most difficult course" – aware he would be competing for entry against high-achieving local, Singaporean and Hong Kong students at a time when medicine was a key priority for regional capacity building.

Khalid won a place and moved into International House, establishing a global and local friendship network through a college that "established the sense that the world was for all of us, camaraderie across the boundaries. The first thing is to be comfortable with people, regardless of where they come from. I think that was fantastic!"

Khalid also thrived in his medical studies, and, increasingly, cardiology. The investment in his career would generate valuable returns for Malaysia and the medical profession through his subsequent medical and academic leadership.

After training in medicine in Australia and undertaking three years cardiology specialisation in the UK, Khalid returned to Malaysia, where he began to teach and cultivate the practice and scientific investigation of his speciality. He established the first clinical cardiac electrophysiology laboratory there, advocating for new techniques such as 3D-echocardiology, endothelial function, pulse wave velocity and heart rate variability assessment. He set up the Heart Centre at Universiti Kebangsaan Malaysia (UKM) – now a major cardiac centre – and the UKM Molecular Biology Institute (UMBI) – now one of the main centres for molecular science.

Khalid’s strong advocacy for medical research accompanied his many roles as project leader and principal investigator in a long list of research projects. His research has been cited widely by his peers and published in high-impact refereed journals. His final work was on understanding the socioeconomic impact of the epidemiologic transition with which developing countries such as Malaysia were struggling worldwide.

Khalid’s research performance and impact have been greatly valued by colleagues the world over. He was a recipient of fellowships and elected to leadership positions in international general and specialist medical societies and colleges. His many contributions to consultative bodies stand as testament to the great store placed on his expertise by governments, academic institutions and learned journals.

In addition to these clinical and research leadership roles, Khalid demonstrated a passion for effective medical education aligned to the needs of Malaysia. This was best demonstrated in his development and implementation of the medical course at the Universiti Teknologi MARA (UiTM) as its Foundation Dean.

Within this role, he built four medical campuses implementing a futuristic hybrid curriculum based on solid scientific foundation, imbued with strong humanistic values and supported by a vibrant educational ambience. This course applies the best evidence in medical education to bioscience and clinical learning opportunities, building clinical leaders ideally suited to the evolving Malaysian health system.

Most notably, Khalid established the Institute for Medical Molecular Biotechnology (IMMB) and the Centre for Translational Research and Epidemiology (The CenTRE), which are fast becoming substantial research centres in Malaysia. As part of this process, he forged strategic international partnerships linking UiTM’s medical faculty to a wide range of global universities and research institutes (including developing formal partnerships with the University of Melbourne and Bio21). These initiatives substantially contributed to the Malaysian medical workforce and national medical research.

Khalid’s exceptional contributions are reflected in an impressive list of national and international recognitions, in particular:

In 2014, he was awarded a Doctor of Medical Science (honoris causa) by the University of Melbourne.

As shown by these incredible achievements, Khalid was deeply committed to advancing medical practice, research and tertiary education in his country. Many of his Malaysian contemporaries chose relatively early in their careers to leave the university and public hospital sectors to pursue medicine in the much more remunerative private sector. Khalid instead accepted the challenge of academic leadership and became dean of the medical faculties at two universities and ultimately Vice-Chancellor and President of UCSI University. As recorded recently in an obituary in the BMJ, Khalid was a ‘champion of excellence’ in all he did. Throughout his life, he remained humble and self-effacing.

Finally, Khalid was a humanist as well as a scientist, with a great gift for friendship. He had a long and happy marriage with Professor Datin Paduka Dr Khatijah Mohd Yusoff, with whom he shared two children. A molecular biologist and virologist who received her tertiary education at La Trobe University, Khatijah became Deputy Vice Chancellor (Academic and International Affairs), Universiti Putra Malaysia and Deputy Secretary General, Ministry of Science, Technology and Innovation Malaysia along with many other roles.

Khalid Yusoff’s career in cardiology, medical research, higher education and academic leadership is inspirational and the Melbourne Medical School should be very proud of one of its most distinguished alumni.