The first surgeon in Malaysia to perform a renal transplant. 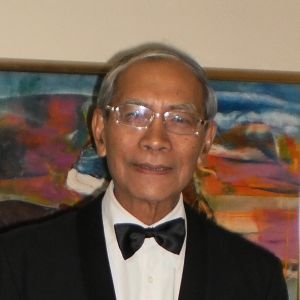 Hussein Awang (MBBS 1965) entered Melbourne Medical School in 1959 following secondary education boarding at Melbourne Grammar School. He cherished happy memories of these school years, where his cheerful, kind personality led to many friendships, some of which he enjoyed for all his days. He reveled in the Australian way of life and excelled in sport.

On campus at that time there were many Malaysian students, most from Chinese and Indian families; Malays were in the minority, and this made Hussein rather unique. His family came from Johor Bahru, where his father, Tun Dr Awang Bin Hassan, was a medical practitioner and a committed internationalist who, after Japanese occupation, became a member of parliament, then High Commissioner in Canberra and, finally, the Governor of Penang.

Hussein's maternal uncle, Tun Dr Ismail Bin Abdul Rahman (MBBS 1945, LLD 1973), was also a Melbourne Medical School alum and the first University of Melbourne graduate from what was then known as Malaya.

Of Hussein's six siblings, four others trained in Melbourne. Elder sister Zahrah (GDip (Social Studies) 1959, BA 1974) studied medical social work, younger brother Matt (Mohammed) stayed to become a charismatic high school teacher, while another younger brother, Yahya, did medicine at Monash, returning to Malaysia to become a leading cardiothoracic surgeon and a founder of the Malaysian Institute of Cardiology. Younger sister Animah (BCom 1971) studied commerce and progressed to be CEO of the Port of Penang.

Conversation around the Awang dinner table was never dull.

Hussein was a resident in the newly established International House, for which he always expressed loyalty and respect and kept ongoing contact with its founders. His charm and modesty made him many friends. Clinical years were spent at the Alfred Hospital Clinical School, where he enjoyed the high standard of teaching and the inclusive social life.

After graduating from medicine, Hussein returned to Malaysia, where he got married and commenced resident years at the General Hospital in Singapore and Johor Bahru. He trained in general surgery and gained the FRACS in Singapore in 1969. He then moved to the General Hospital Kuala Lumpur (GHKL) for urological training under Dr G. Sreenevasan. The heavy workload included many cases with advanced pathology, such as staghorn renal calculi and neglected tumours. He rapidly acquired exceptional clinical and technical skills.

With his polite, easy-going nature and high ethical standards combined with a political adroitness, he advanced to lead a world class urological unit. He was one of the founding members of the Malaysian Urological Association (MUA) in 1974. As cadaveric transplantation was not allowed on religious grounds, he moved directly to living related donation and in 1975 was the first surgeon in Malaysia to perform a renal transplant. After this success he went on to do a total of 75 transplants at GHKL, all without fuss in routine surgical wards. He held many offices, including representing Malaysia on the council of the Asian Association of Surgeons.

In the 1980s, Hussein and two colleagues saw the need to relieve the pressure on public hospitals and to meet the demand for private healthcare. With investment by the Johor Corporation and others, Tawakal Specialist Centre, a 66-bed private specialist hospital run by doctors, was built opposite GHKL. The former Prime Minister, Tun Dr Mahathir graced the official opening of Tawakal in 1983, and it grew through several extensions and re-builds to a purpose-built hospital of 200 beds with most of the senior specialists from GHKL on staff. It offered the latest in diagnostic and technical innovation.

Hussein remained the dominant influence and ensured that patient respect and care came first and that charity was appropriate in situations of financial difficulty. The original investor, JCorp, as a result of this success, has gone on to develop a network of 28 hospitals with 3000 beds in Malaysia, Indonesia, Thailand and Bangladesh – now known as KJP Healthcare.

Recognition of Hussein’s contributions came when he was made Datuk (‘Sir’) in 1981.

His love of golf remained strong, and he was a regular spectre in the morning mist at Royal Selangor Golf Club. Horses were another keen interest, and he became an owner and breeder. He was a regular at Melbourne's Spring Racing Carnival and could be seen surrounded by a cheerful crowd or darting through the throng hunting down old mates.

Hussein's first wife Sariah predeceased him. She also had a fine career at GHKL, becoming the charge nurse in the paediatric intensive care ward. Hussein and Sariah’s only child, Dr Zanariah Hussein, is a consultant endocrinologist and physician at Hospital Putrajaya, where she is Head of the Endocrinology Subspecialty Service. She delighted in withholding the names of prominent patients from her inquisitive and persistent father.

In his closing years, Hussein’s vitality started to fade. But what never faded was his love for his family and for Melbourne, his other city.