Professor Alison Yung has devoted her career to helping those at risk of serious mental illness. 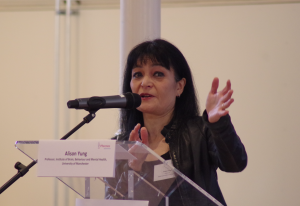 Shining a light on mental illness

Two very different experiences inspired Professor Alison Yung (MBBS 1986, MD 2004, GDipEpid&Biostat 2004) to devote her career to those at risk of serious mental illness. One of them demonstrated the devastation that psychosis can cause, while the other offered hope of a better way.

The first incident occurred when Professor Yung was a medical resident in the Royal Melbourne Hospital’s mental health unit, where she saw a woman who had poured hot oil over herself when experiencing a severe psychosis, causing serious injuries.

In the second, a woman Professor Yung had talked to and calmed while psychotic returned to hospital with a knee problem. She was cured of her psychosis and able to recall their conversation.

While each was confronting in their own way, these experiences sparked a lifelong passion for improving the outlook for those at risk of psychosis. Until then, nobody had told Professor Yung, now an internationally renowned consultant psychiatrist and researcher, that people with mental illness could recover.

Professor Yung’s empathy and forward thinking saw her quickly become a leader in her field. As part of her psychiatry training in the mid-1990s, she developed an internationally used system to predict those at risk of psychosis and has studied its early detection since.

As a child growing up in Melbourne’s eastern suburbs, Professor Yung loved animals and dreamed of becoming a zoologist. But medicine was in her blood, and she followed her late grandfather, Winston Wing Yung, late father Allen Yung (MBBS 1960), and older brother Michael (MBBS 1985) into the profession.

Professor Yung trained at the University of Melbourne, the Royal Melbourne Hospital and Monash Medical Centre. She has fond memories of her university days, including the friends she met and appearing in the end-of-year Medleys medical student revue.

As part of her psychiatry training, Professor Yung interviewed young people who had recovered from psychosis to establish common risk factors. They included increased self-consciousness, a feeling of being watched or followed and being unsure if their thoughts were their own.

The resulting Comprehensive Assessment of At Risk Mental States (CAARMS) was translated into 18 languages and is widely used in Australia, the UK, Europe and Canada. It allows health professionals to use interventions such as cognitive behaviour therapy and, if appropriate, medication to avoid a first episode of psychosis.

Professor Yung spent 2012-2018 at the University of Manchester, where she worked with the Greater Manchester Mental Health Trust on early intervention and research on exercise as an intervention for first-episode psychosis.

Participants who exercised for more than 100 minutes a week decreased their level of depression. “It’s quite extraordinary when you think about it,” Professor Yung says. “This is such a low-cost intervention.”

Since returning to Melbourne in 2018, Professor Yung, who is now primarily based at Deakin University, has continued to focus on exercise and mental wellbeing, most recently with the Aboriginal-led Rumbalara Football Netball Club in Shepparton.

That VicHealth-funded project is investigating the importance of sport and social connectedness in mental health and resilience against racism. Its 2020 launch was delayed by COVID-19, which forced much scientific research online.

Professor Yung has continued her clinical work with people who have severe schizophrenia and a study on risk factors in those at high risk of psychosis. Another project, funded by HeSANDA, aims to increase data sharing to improve how research data is used to ensure nothing important is wasted.

“I have to force myself to have an EFD (exercise free day) about once every two weeks,” Professor Yung says. “My main form of exercise is road cycling but if I were to compete in the Olympics, I would choose track cycling. I have cycled at the Manchester Velodrome a few times. It is fun but very exhausting.”

While attitudes to mental illness have improved, there is a long way to go. Professor Yung has lost none of her passion to improve the prognosis of those at risk of psychosis and reduce the stigma.

“My priority is trying to do research that actually makes a difference for people,” she says. “I want to leave a legacy where what I’ve done has actually improved the lives of people with psychotic disorders. I want my research to change practice or change policy so that it actually has an effect, as there are still big unmet needs.”