For 1942 graduate Evelyn ('Lyn') Livingstone Billings (nee Thomas), medicine was the bridge between a childhood in the southern Riverina and an international reputation in fertility regulation. 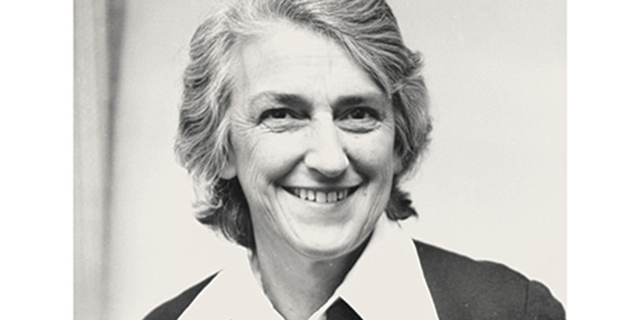 For 1942 graduate Evelyn ('Lyn') Livingstone Billings (nee Thomas), medicine was the bridge between a childhood in the southern Riverina and an international reputation in fertility regulation.

An eloquent, witty and resourceful woman, her life changed profoundly early in the medical course when she glimpsed prosector, John Billings, across a sea of cadavers. Their relationship thrived despite deeply felt differences – he was a devout Catholic and she a committed Anglican. They married in 1943, she having changed religious affiliations, only to be separated shortly afterwards by the war.

In 1966, when the youngest of their nine children was in primary school, Lyn joined John in refining and communicating what became known as the Billings Ovulation Method of fertility regulation. The method grew out of recognition that many couples wanting to space their families while complying with Catholic directives, found it difficult to avoid conception using the church-sanctioned Rhythm Method of periodic abstinence. As well, the Billings were aware of women seeking to have a family who were only vaguely aware of their signs of fertility. The approach John had been researching relied on women recognising and interpreting the changing sensation and appearance of mucus at the vulva, which signalled the fertile phase of the menstrual cycle. Importantly, it could be used to avoid or achieve pregnancy.

By the 1960s the work of correlating reproductive hormones, ovulation and the changing mucus pattern during menstrual cycles was under way, much of the research being undertaken by Billings' collaborator and renowned biochemist, Professor James B Brown of the professorial unit at the Royal Women's Hospital. John had also established by then that most women could recognise and understand the significance of their changing mucus pattern. With additional scientific input from scientists including Prince Henry's Institute endocrinologist, Henry Burger, the Billings developed a set of guidelines for avoiding or achieving pregnancies. A five-centre international trial undertaken by the World Health Organisation in the mid-1970s confirmed its scientific validity, while also noting the importance of high motivation, good communication and excellent cooperation among couples.

Lyn was particularly adept at teaching women to identify and interpret their mucus patterns and to understand the guidelines. In the early years of the method's development, John was inclined to consider that technological back-ups such as temperature readings were needed. But he deferred to Lyn's view that such buttressing measures made the method more complex and could prove a distraction.

The Melbourne Medical School recognised Lyn's teaching talents, appointing her a demonstrator, tutor and prosector in the late 1960s and through the 1970s. She resigned in 1982 and was appointed an honorary associate. By then, she and John were travelling often, explaining and teaching the method. They visited more than a hundred countries and were especially sought-after in China, which they visited more than 20 times.

Lyn considered that self-knowledge by women of their in-built signs of fertility was their birthright, regardless of race, religion, education or income. This belief was the driving force behind our collaboration in the late 1970s on the best-selling book, The Billings Method (Anne O'Donovan publisher), which many women found helped them tap into body rhythms about which they lacked sound knowledge.

She died in February 2013, aged 95, her legacy spanning continents.