Marie Swaney (nee Cockbill) and Bill Swaney were a remarkable couple, each an alumnus/a of Melbourne Medical School, who died within four weeks of each other in 2013. 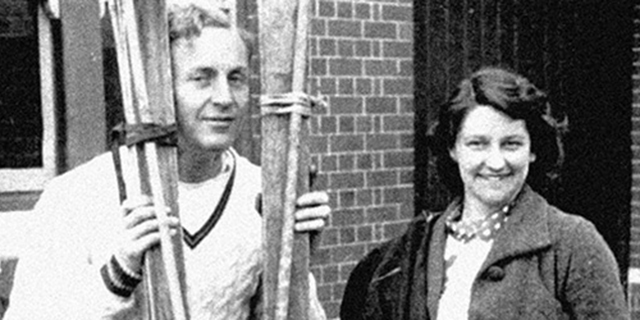 Marie Swaney (nee Cockbill) and Bill Swaney were a remarkable couple, each an alumnus/a of Melbourne Medical School, who died within four weeks of each other in 2013.

Marie was a scientist, a medical practitioner, an anaesthetist, a qualified Cordon Bleu cook, a wool classer, a meticulous bookkeeper, a farmer, a gardener, a skier, a skilled hockey player, a sneaky tennis player, an imaginative historian and, a doting mother, grandmother and great grandmother, a loving and enduring partner, a friend to many, a tireless letter writer, endless telephone-caller, a rememberer and congratulator of every conceivable anniversary, and very often a peacemaker.

Bill was an orthopaedic surgeon, a feared examiner, an exacting teacher, a demanding surgeon, a domestic autocrat and a Collins street farmer.

Marie, elder of the two, was born in Melbourne on 28 February 1916. She grew up in a warm, comfortable and happy environment, with doting parents and loving siblings. Their parents valued education and Marie, with Charlotte, was sent to Melbourne Girls’ Grammar.

Marie clearly was a success at school and her name regularly appeared on prize lists. Her meticulous organisation (which nearly drove her children mad) was the reflection of an ordered mind. Her brother Jack described a row of jars on her dressing table: the last jar was labelled, ‘pieces of string too short to tie’.

At the age of 16, Marie went to the University of Melbourne. She had wanted to study medicine, but her father persuaded her to enroll in science. Somewhere in her post school years she also undertook the Domestic Science course at the Emily McPherson College of Domestic Economy. She went on to do a secretarial course and became a competent touch typist. However, domestic and secretarial skills held limited interest for her and having completed her science degree she persuaded her parents to support her in studying medicine.

Despite the prejudices and expectations of Melbourne society of the 1930s, there were a significant number of women in science and medical courses at Melbourne University. Her children got to know them well: Gwen Hewitt, Nancy Heyward, Effie De Ravin, Bettie Cameron and Mary Wheeler to name a few. But, throughout her medical course and the early years of professional life Marie encountered stereotyping and patronising attitudes. She told of one male student who at the start of every practical class would call out, ‘Come over here Marie and I’ll help you with your work’. The correct interpretation of this statement was: ‘Come over here Marie and help me with my work’. Marie said she got used to patients saying to her, ‘Thank you sister, I’d like to see a doctor.’

Marie persisted and continued to work as a medical practitioner. She was a resident at the Royal Melbourne and then the Royal Children’s Hospitals. She was appointed an assistant anaesthetist at the Royal Children’s in 1952 and in 1956, and was one of the first women to qualify as an anaesthetist and be admitted as a Fellow of the Faculty of Anaesthetists, Royal Australasian College of Surgeons. In 1966 she moved to the Royal Melbourne Hospital as an anaesthetist and joined the original open-heart surgery team in Melbourne. Finally, in the early 1970s she took up the position in which she was most interested: working as a demonstrator in histology at the Anatomy School at Melbourne University. At the time of the Vietnam War, nothing could attract more interest and attention for her children than to tell their mates that their mother was a demonstrator at Melbourne University.

Marie had a strong sense of social justice. She was a benefactor of the Mission to Streets and Lanes and a constant supporter of the Mission of St James and St John. She sat on the board of Yooralla for years, and gave ongoing support to the Brotherhood of St Lawrence.

William Eric Swaney was born three years after Marie, at Footscray, on 12 March 1919. His father was a public servant who through hard work and resourcefulness had, at a very young age, risen to be Secretary of the Victorian Railways – a major enterprise at that time. His mother’s family owned a steel foundry.

Bill attended Scotch College. An only child, the community of a large boys’ school held an obvious attraction to him – he was ferocious on the rugby pitch and rowed bow in the 1937 Scotch First Crew.

From Scotch he went to the University of Melbourne to study medicine, where he met Marie. They were married in 1943 and their life together was a dynamic mixture of close collaboration and intellectual competition. They were inseparable, but their occasional noisy domestic discussions surprised and even alarmed visitors to the house. Their fierce loyalty and strong mutual support often only recognised by close friends and family.

Whilst Bill had an extraordinary memory he recognised that Marie was the more intellectual of the two. Inevitably, however, Bill would have the more constant and socially recognised career. Whilst Marie’s first love would have been cardiology, it would not have blended well with her family or Bill’s career, so she chose anaesthetics as her specialty. Her attention to detail, organisation and perfection made her particularly well suited to this specialty.

The unfulfilled talents of each of the pair sometimes led to frustrations and unusual incidents. Marie, who won wool classing prizes at the Royal Melbourne Show, would be in the shearing shed classing wool and Bill, dressed in a suit and frilly apron, and about to leave for the Royal Melbourne Hospital, would be in the kitchen making scones for the shearers’ morning tea. There were often differences of opinion, they were often public, and engaging the audience was not unknown. Underneath, however, they held a single-minded loyalty to each other, and the safest course for observers was to remain as such.

Following university, Bill went to the Alfred as a resident doctor before joining the Army as a medical officer. During the war years he was a Regimental Medical Officer in New Guinea and Rabaul. Through his courage and endeavour he was mentioned in Dispatches. The war years and his work as a Medical Officer brought a significant change to his attitudes to medicine and to his skills. As a Medical Officer, he frequently worked alone, in the most difficult of circumstances, treating and operating on sick and wounded soldiers. It provided him with experiences and skills he would never have learned in civilian medical life.

After the war, Bill had various hospital appointments eventually taking a position at the Royal Melbourne Hospital and completing his fellowship exams for the Royal Australasian College of Surgeons. In 1951, he moved to England, with his young family, to train for the Fellowship exams for the Royal College of Surgeons. He passed the exam on his first attempt, a feat that was at that time considered exceptional.

On returning to Melbourne, Bill commenced private practice and was in due course appointed Senior Orthopaedic Surgeon at the Royal Melbourne Hospital and consultant Orthopaedic Surgeon to the Australian Army, holding the rank of colonel, a role that sent him once again into the war zone of Vietnam. He served in various community organisations, sitting on the Scotch College council through turbulent years, and took an interest in a number of professional associations.

Bill’s exceptional knowledge of anatomy was well known in medical circles and amongst students. Going far deeper than just identifying structures, he understood the mechanics of the joints, tendons and ligaments and their blood and nerve supplies. This knowledge enabled him to pioneer several unique procedures, in many cases restoring mobility and quality of life for patients.

Marie and Bill Swaney shared 70 years of companionship and support; separation by war, professional careers, family achievements and sadness caused by son John’s premature death, isolation through deafness and incapacity through old age. Marie and Bill saw it out to the last. Bill provided interest and legendary hospitality. Bill’s gin and tonic pouring was legendary. He could make a bottle of tonic water last a whole year! If the occasional feather was ruffled, Marie was there to smooth it down. They very obviously loved each other.