In 2022, around 487,500 Australians were living with dementia. By 2058, that figure is expected to rise to almost 1.1 million people, according to Dementia Australia.

An ageing population means dementia is a significant health issue in Australia. It is particularly concerning in Aboriginal and Torres Strait Islander communities, where rates of dementia are three to four times higher than the rest of the population. Evidence also suggests dementia and cognitive impairment are under-diagnosed, including in these communities, and many people do not receive the treatment they need to live better.

An initiative at the University of Melbourne is seeking to address this gap. The Let’s CHAT (Community Health Approaches To) Dementia in Aboriginal and Torres Strait Islander Communities is a research project with 12 Aboriginal Community Controlled Health Services (ACCHSs).

The aim is to improve the detection of cognitive impairment and dementia and to provide effective management once someone is diagnosed. Let’s CHAT is also researching how to optimise brain health within First Nations communities. The project has developed a best practice model for primary care health professionals working with Aboriginal and Torres Strait Islander older people at risk of, or living with, dementia. The guide combines clinical and cultural recommendations on health promotion and prevention, and on detection and management of cognitive impairment and dementia. It also includes information about end-of-life care and carer health and wellbeing.

The guide is endorsed by the National Aboriginal Community Controlled Health Organisation (NACCHO) and by the Royal Australian College of General Practitioners (RACGP, accepted clinical resource) and is available on the RACGP website.

“Our work has always been built on partnership with communities and began in 2003 when we went to the Kimberley and developed a dementia assessment tool that was culturally appropriate for the communities there. We soon understood there was very little awareness around dementia, but rates of dementia were quite high, and people wanted to know more about how to care for their Elders,” says Associate Professor Dina LoGiudice (MBBS 1985, PhD 1997), Let’s CHAT Dementia Project Lead.

With the collaboration of ACCHSs, the project uncovered some of the challenges and barriers for First Nations people in preventing and managing dementia.

“Finding appropriate ways to talk about dementia is a challenge. For younger people who are conscious of respecting their Elders, how do you start asking them about their memory and cognition without being offensive?” says Associate Professor LoGiudice.

“In general practice and primary care settings, there is also the issue of lack of time. First Nations people may have a number of chronic illnesses and it takes time to also address cognitive impairment. Healthcare providers also need to feel confident in having the skills to talk about the issue of dementia.

“Many older people experiencing dementia are part of the Stolen Generation who experienced the trauma of being forcibly removed from their families, country and culture and we also recognised the importance of cultural safety and ensuring they are not re-traumatised as they receive care and support. We had feedback at every stage to ensure the tools we developed were culturally safe and relevant for First Nations communities.”

The Let’s CHAT Dementia project has produced a range of resources and tools to support grassroots healthcare professionals working with First Nations communities. 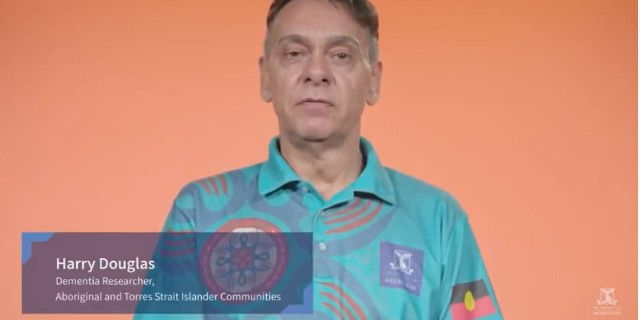 “Aboriginal health practitioners told us they felt uncomfortable approaching Elders, so we developed a video that highlights ways of yarning and how to approach memory and thinking problems. Another video shows how to administer a culturally appropriate assessment tool,” says Associate Professor LoGiudice.

In collaboration with Dementia Training Australia, a webinar series gives an overview of cognitive impairment and dementia care. It follows Aunty Molly and her journey from presenting with memory and thinking problems to dementia diagnosis and management of her changing needs.

Cognitive impairment questions have been embedded in medical software and can be introduced during annual checks for Aboriginal and Torres Strait Islander people over the age of 50. A recent NHMRC grant is also continuing the work started by the Let’s CHAT Dementia project.

Associate Professor LoGiudice with Professor Dawn Bessarab, Director of the Centre for Aboriginal and Dental Health at the University of Western Australia, is now co-leading the On TRACK (Teaching, Research and Community Knowledges) Centre for Research Excellence. The initiative unites researchers and communities in a safe, collaborative space to continue to generate research, knowledges, tools, workforce innovation and outcomes to help older Aboriginal and Torres Strait Islander people at risk of, or living with, dementia.

“Hopefully the resources we have developed will ensure First Nations peoples with memory or thinking problems receive the best care throughout the different stages of their dementia,” says Associate Professor LoGiudice.

“I’ve specialised in this area for about 20 years and it has been a privilege and pleasure to work so closely with Aboriginal colleagues and communities and to see how this work has grown and how the importance of dementia and brain health has developed in recent times.”

*Uncle Jack Charles has since passed and his name is used in public with the permission of his family.