Celebrating the MBBS Class of 1972

On their 50th anniversary, the Class of 1972 reflect on their experiences in the rapidly changing world of medicine and celebrate their many contributions and achievements. 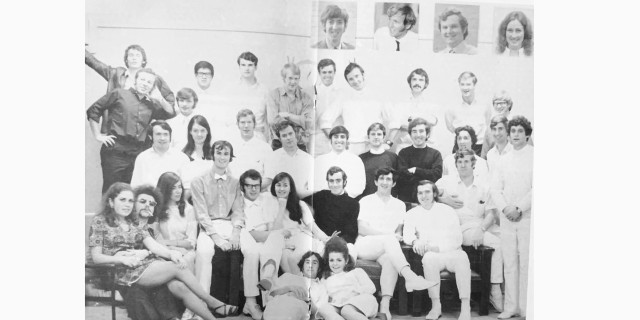 In 1967, 220 young medical students embarked on a life journey, much of which was influenced by their medical careers.

It was a tumultuous time. Harold Holt, the Prime Minister of Australia, disappeared while swimming near Portsea, Victoria. Decimal currency had just been introduced and the referendum to formally recognise Indigenous Australians for the first time was successfully passed. The Vietnam war was confronting, with increasing community resistance. Little did we know that we would face the possibility of conscription in three years’ time.

Our initial cohort of 220 students was pruned back to 180 by second year. There were 25 females in the cohort, so there was little gender or any other kind of diversity – a pattern reflecting community norms at the time.

Most students were supported by Commonwealth Scholarships, so education was essentially free. It was not until 1973 that Whitlam introduced universally free tertiary education.

Our initial lectures were in the old anatomy, physics, chemistry and botany buildings. In 1968, we were the first group to move into the seemingly modern tri-radiate building. Based on the main campus for the first three years, we interacted with students from all faculties, took part in campus activities and spent time in the ‘Caf’.

During the last three years, we spent most of the time at our individual locations of St Vincent’s, Royal Melbourne and Austin Hospitals, with additional 10-week rotations to the Women’s and Children’s Hospitals – a highlight for many! December 16, 1972 was a defining moment in our lives. In the course of one crucial minute, as each of us individually crossed the stage of Wilson Hall, receiving congratulations and our graduation certificate, we were transformed from medical students to doctors. We descended the stage with life‘s potential paths and our medical careers ahead of us.

The time spent together, as a cohort, created a sense of cohesion perhaps not seen amongst medical students today. This sense of togetherness has been maintained by reunions every decade and ongoing professional and personal connections.

Unlike today, it was then possible to go straight into medical practice. Some followed this path while others developed an interest in various specialties. Indeed, shortly after our cohort served as hospital residents, the first specialty and general practitioner training programs were introduced.

We have been a fortunate generation of doctors – participants in one of the most explosive eras of medical knowledge and innovation. Our professional lives have paralleled and witnessed the most prodigious and previously unimagined advances in medicine, in which most of us have been involved or led.

There have been extraordinary innovations in technology, such as the development of CT, PET, MRI, ultrasound, joint prostheses, implantable defibrillators, heart valves, and 3-D printing of body parts to name a few.

There have also been new systems of care, like MICA ambulances, coronary and intensive care units, and significant advances in the treatment of heart attack and stroke – two of the most lethal conditions in our society. This was accompanied by the construction of multiple new public and private hospitals and an explosion in the number of prestigious research institutes, especially in the Parkville precinct.

Therapeutics that did not previously exist have been developed. Statins, heart failure drugs, antivirals, new diabetic medications, thrombolytics, cytotoxic drugs and immunotherapies are now a standard part of medical practice. There has been an evolution in once unimagined procedures, like in vitro fertilisation and liver, pancreatic, heart, lung, bone marrow and stem cell transplants. Surgical procedures have become progressively more sophisticated. Laparoscopic, robotic and percutaneous interventions facilitate rapid patient recovery.

At a broader level, we have witnessed RNA and DNA sequencing, decoding the human genome. The most devastating, incurable malignancies and HIV-AIDS have become chronic diseases.

In 1975, the healthcare system was underpinned by a new universal health insurance system – Medibank, now Medicare. Introduced by the Whitlam government, it is arguably one of the best health and medical systems in the world.

Our careers have spanned the breadth of the medical spectrum – from general practice, which is the bedrock of medical care, to specialists, academia, research, public and global health. Many of us have added to the world medical knowledge in stroke, cardiac and renal care, virology, urology, orthopaedic and plastic surgery, oncology and endocrinology. We have played an important part in educating multiple generations of upcoming doctors.

The class of ‘72 certainly lived up to its potential. This success was manifest by 20 Orders of Australia, 24 Professors or Associate Professors, and multiple accolades for service to medicine, the community and humanity.

As a mark of our commitment to education and appreciation for the opportunities we had, we established the Class of ‘72 Medical Scholarship in perpetuity at the University of Melbourne. It supports young students with outstanding potential, but with limited means or social support, to become doctors.

As well as its successes and rewards, life has its pitfalls and challenges. Sadly, 16 of our classmates faced insurmountable hurdles and have died. We respectfully remember them and take forward their memories.

After 50 years, as we pass on the baton to others, the Class of ‘72 is proud of the contribution it has made and the legacy it leaves to medicine and to the Australian community.