Department of Psychiatry - Engagement with China 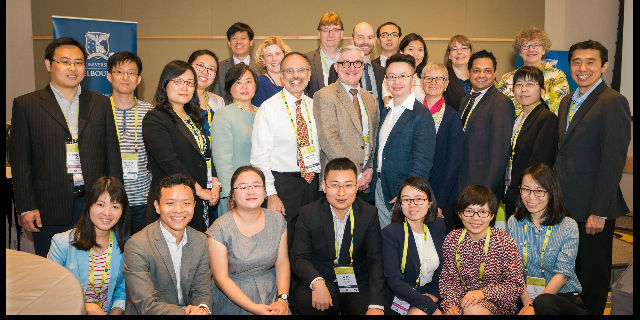 The MMS Department of Psychiatry, working with Asialink,[1] has been very active in developing relationships with colleagues in China to facilitate the development and delivery of culturally and context appropriate training programs promoting mental health. A service agreement recently executed between the University and Shenzhen Kangning public mental health hospital requires the Department of Psychiatry to facilitate the building of psychiatric specialty services at the Hospital by developing and delivering a program of professional development in clinical mental health that will also support its research capacity. The official signing ceremony for the agreement was held in Shenzhen, China on Friday 24 June 2016.

In late June, staff from the MMS Department of Psychiatry with colleagues from Asialink, North Western Mental Health and Victoria Police delivered at Shenzhen Kangning Hospital a psychiatric hospital in Shenzhen a city in Guangdong Province China, a three-day Crisis Intervention Training Program.  Developed by its presenters, it is designed to provide Chinese healthcare, community sector, government, police and media professionals with an in-depth understanding of mental health crises and emergencies, and, the practical skills to predict, respond to, and manage crises when they arise.  This first-of-its-kind Mental Health program for China program was attended by over 100 people from a range of professional backgrounds including medicine, journalists and police officers. The program showcased the patient-centred approach Australia, and in particular Melbourne, has adopted, with the view that its developers will work further with partners in Shenzhen to tailor models to a Chinese context.

Mindful, a training unit of the MMS Department of Psychiatry, led by Associate Professor Aleessandra (Sandra) Radovini focussed on Child and Adolescent Mental Health has developed an autism awareness and intervention training program for delivery in Shenzhen and Shantou cities in Guangdong Province China in 2015 and 2016.

The University of Melbourne and Peking University established  the Centre for Psychiatry Research and Training in 2014 with the purpose of growing collaborative psychiatric research and to build the research capacity of mental health professionals from Australia and China. To date three PhD students and two postdoctoral fellows have participated in an exchange program and a diverse range of research is being conducted, which includes: a longitudinal study on social support and well-being among natural disaster survivors; utilising large genetic datasets to identify and validate gene-based classifiers for schizophrenia; and using state of the art techniques to identify biomarker signatures in autism spectrum disorder. Research outcomes have formed the basis of three joint research symposia in Beijing, Melbourne and recently Hong Kong during the Royal Australian and New Zealand College of Psychiatrists (RANZCP) Congress.  The Centre is also working with Peking University Healthcare to develop a course for trainee psychiatrists across China as well as culturally appropriate education programs for parents.