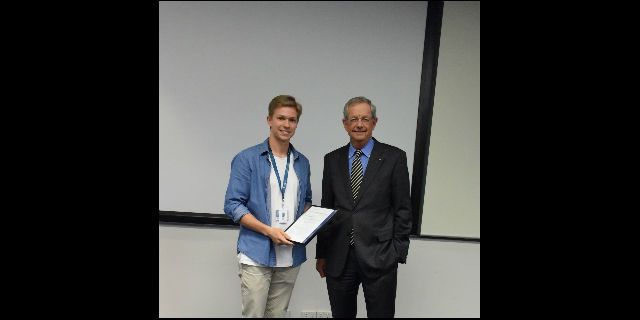 The annual Student Award Presentations celebrating the Parkville Precinct’s best and brightest research students undertaking Honours, Master of Biomedical Sciences and PhD studies was held on 23 May at the Royal Melbourne Hospital

Special guest of honour at the presentation was Richard Larkins, Vice Chancellor of Monash University (2004-2009), Dean of the University of Melbourne Faculty of Medicine, Dentistry and Health Sciences (1998-2003) and James Stewart Chair of Medicine at RMH (1984-1987) who presented the Richard Larkins Prize to the top honours student in the class of 2015.  (The photograh shows Professor Richard Larkins presenting the prize in his name to Justin Gourlay for the top onours student in the 2015 honours program.)

Departmental Honours Awards were presented to students in recognition of their excellent performance in the Departments of Obstetrics and Gynaecology, Medicine and Radiology, Psychiatry and Surgery.

It was a pleasure to welcome the family of Mr Nick Christopher, Manager of the Department of Medicine at RMH from 2001 until his death in November 2008 to present the Nick Christopher PhD Scholarships prize.

The Graham Brown Best Student Publication prize was awarded in recognition of Professor Graham Brown’s (former James Stewart Chair of Medicine at RMH) prolific influence on PhD students to publish while undertaking their research. This prize is awarded to a student in the Department of Medicine and Radiology (at RMH) who is judged to have published the most outstanding peer reviewed paper as first author.

A very special thank you to the Department of Medicine and Radiology, particularly Professor Terry O’Brien, Dr Chris French and Ms Mary Ljubanovic for organising and hosting the successful event.

Recipient of each award were as follows: