Professor Meredith Temple-Smith was awarded a small grant to establish an Australian version of the Tommy’s website.

As a recipient of the University of Melbourne-University of Birmingham Collaboration Fund, Professor Meredith Temple-Smith recently spent three weeks in Birmingham, at Tommy’s Centre for Miscarriage Research, the largest research centre of its kind in Europe. A collaboration between three top research universities, the centre opened in April 2016 and works on understanding and preventing the biggest cause of pregnancy loss in the UK. It also enables 24,000 women a year to access treatment, support, and the opportunity to participate in trials. The centre is led by Prof Arri Coomarasamy, Head of Obstetrics and Gynaecology at the University of Birmingham. With his collaboration, and that of Helen Williams also from Birmingham, alongside Dr Jade Bilardi from Monash University and Honorary of DGP, Meredith was recently awarded a small grant from the Melbourne Networked Society Institute, to establish an Australian version of the Tommy’s website. 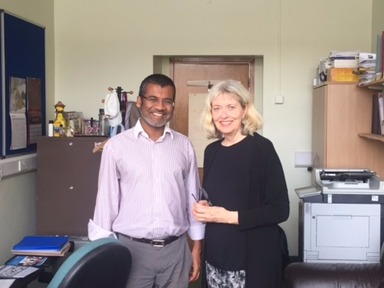