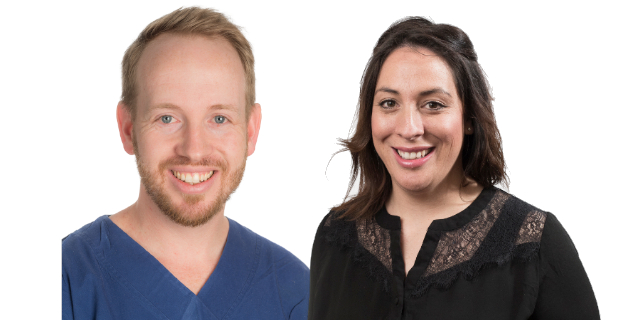 Congratulations to The Department of Obstetrics and Gynaecology researchers A/Prof Tu’uhevaha Kaitu’u-Lino and A/Prof Brett Manley who were named as two of the nine Level D Dame Kate Campbell Fellows to recognise their incredible contributions to the Faculty through outstanding research and wider involvement in our local community and across the globe.

A/Prof Tu’uhevaha Kaitu’u-Lino is the head of the Diagnostics Discovery and Reverse Translation, based at the Mercy Hospital for Women.Passionate about improving outcomes for mothers and their babies, she is currently focused on developing novel blood tests that could identify which pregnant women are at risk of serious complications such as preeclampsia or stillbirth. If successful, such blood tests could change clinical practice, allowing increased surveillance and monitoring of high risk women, to ultimately reduce the devastating consequences of these complications. In addition, she hopes her diagnostics work will inform further research into better understanding why and how these diseases occur.Currently holding a NHMRC CDF2 Fellowship, A/Prof Kaitu’u-Lino has a track record of success, having accumulated >$12M in research funding and publishing widely. She is also a generous contributor to her discipline and enjoys supervising and mentoring the next generation of both scientists and clinician scientists. A mother of four children, A/Prof Tu’uhevaha Kaitu’u-Lino is also a strong supporter of women in STEMM.

A/Prof. Brett Manley is a Consultant Neonatologist at The Royal Women’s Hospital, and a clinical researcher who conducts large, multicentre randomised trials aimed at improving outcomes for newborn, particularly preterm, infants. He is especially honoured to receive this Fellowship, given that Dame Kate Campbell was the inaugural neonatal paediatrician at the Women’s, and was one of the first to link excessive oxygen therapy to blindness in preterm infants. Currently Brett leads the international PLUSS trial of intratracheal budesonide mixed with surfactant to increase survival free of bronchopulmonary dysplasia in extremely preterm infants – a trial that aims to enrol more than 1000 infants across more than 15 centres in four countries. Currently supported by an MRFF Career Development Fellowship, Brett has led several NHMRC Project Grants, is a Chief Investigator on the Centre for Research Excellence in Newborn Medicine, and co-chairs the PSANZ IMPACT Clinical Trials Network. He publishes in the highest ranking general medical and paediatric journals and has given many invited international presentations of his research. He is passionate about training the next generation of clinician researchers and encourages his students to “think big”.