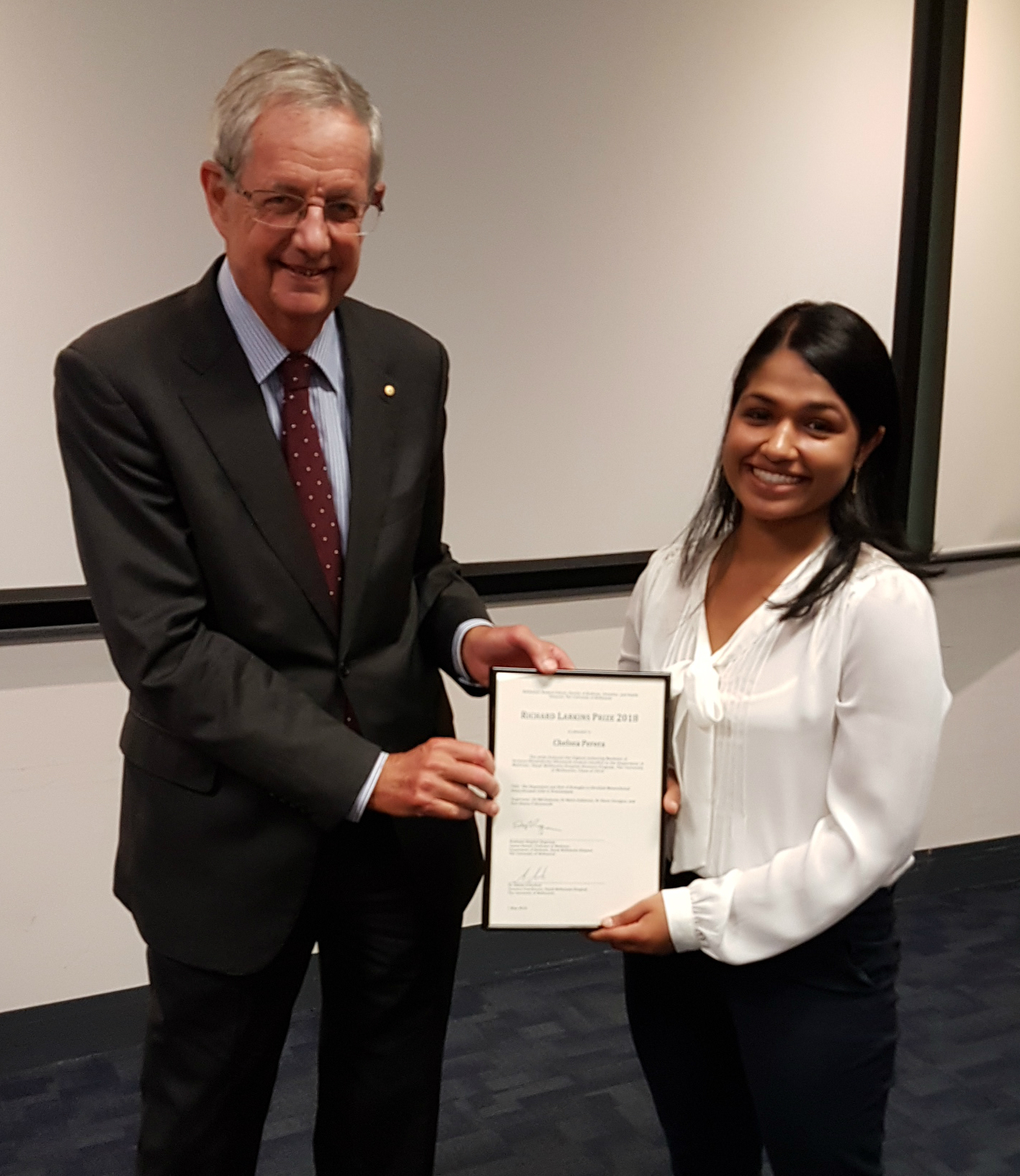 The annual Parkville Precinct Student Awards were held on May 1st at the Royal Melbourne Hospital Function center. At these awards Chelsea Perera was the recipient Department Honours Award and The Richard Larkins Prize for 2018.

Chelsea was awarded The Department of Obstetrics and Gynaecology at the Royal Women’s & Mercy Hospitals, Department Honours Award 2018 in recognition for her outstanding performance in the Department of Medicine, Royal Melbourne Hospital Honours Program, The University of Melbourne.

In 2018 Chelsea completed a Bachelor in Biomedicine with Honours majoring in Cell and Development with a Reproduction and Development specialisation.  The honors project which she was recognised for was completed at the Pregnancy Research Centre, Royal Women's Hospital under the supervision of Dr Bill Kalionis, Dr Maria Kokkinos, Dr Harry Georgiou and Prof Shaun P Brennecke. The project was an investigation of the expression and role of endoglin in decidual mesenchymal stem/stromal cells in preeclampsia.

In addition to this award, Chelsea was also awarded the prestigious Richard Larkins Prize 2018 which is awarded to the student with the highest grade in the Medicine, RMH Honours Program who has completed their degree that year.  This award is named in honour of Emeritus Professor Richard Larkins AO who also presented the award to Chelsea on the night.

The award is named in honour of Professor Richard Larkin who held the positions as Head of the Department of Medicine (RMH/WH) and the James Stewart Professor of Medicine from 1984 – 1998. He was the second James Stewart Professor of Medicine of the Royal Melbourne Hospital, and under his leadership the Honours Program in the Department of Medicine (RMH/WH) was established. He was subsequently Dean of the Faculty of Medicine, Dentistry and Health Sciences from 1998 – 2003 at the University of Melbourne prior to taking up as position as Vice Chancellor and President of Monash University (2003-2009).

Chelsea is currently studying a Doctor of Medicine at the University of Notre Dame, Sydney.

The Department of Obstetrics and Gynaecology want to wish Chelsea the best of luck in all her future studies and career and congratulate her again on her outstanding achievements!