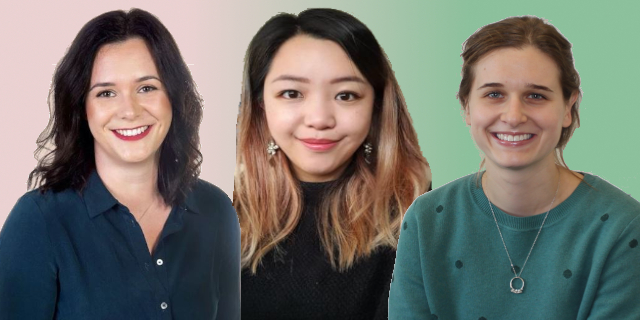 Congratulations to The Department of Obstetrics and Gynaecology students, Catherine Allingham, Caitlyn Nguyen-Ngo and Natasha Pritchard who were awarded the Dr Hubert Sydney Jacobs Memorial Scholarship for 2019 & 2020.

Catherine Allingham was the awardee for 2019 for the paper, Fertility Preservation in Children and Adolescents With Cancer: Pilot of a Decision Aid for Parents of Children and Adolescents With Cancer authored by Catherine Allingham, Lynn Gillam, Maria McCarthy, Margaret Zacharin, Sadunee Jayasuriya, Yves Heloury, Lisa Orme, Michael Sullivan, Michelle Peate and Yasmin Jayasinghe which was published in the Journal of Medical Internet Research in November 2018.

Caitlyn Nguyen-Ngo was awarded for the 2020 paper, Nobiletin exerts anti-diabetic and anti-inflammatory effects in an in vitro human model and in vivo murine model of gestational diabetes, Caitlyn Nguyen-Ngo, Carlos Salomon, Stephanie Quak, Andrew Lai, Jane C Willcox and Martha Lappas which was published in Clinical Science in March 2020.

The Dr Hubert Sydney Jacobs Memorial Scholarship is a mechanism to promote the careers of promising students, a scholarship of $5000 is awarded to a Research Higher Degree Student from the Department of Obstetrics and Gynaecology for the best peer reviewed research paper published in the previous 12 months. The goal is to encourage research higher degree students to publish their research and present their findings at scientific meetings. The Scholarship is named in honour of Dr Hubert Sydney Jacobs (1892 - 1950), a Medical Officer and Captain in WWI and a respected Obstetrician and Gynaecologist who was an "Honorary" at the Royal Women's Hospital in the 1920's, and whose generous bequest funds the award.

Click on the titles below to view the winning papers: