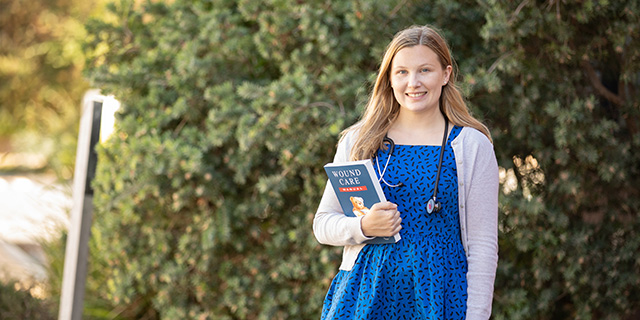 Krystal Green always knew she wanted to be a doctor. As a young girl tagging along to any medical appointment she could, she was fascinated by watching the doctors in her local Shepparton clinic work.

“As a kid I just loved going to the doctor because I was like, ‘What are they going to do? What's going to happen today?’ So if anyone in my family was sick, I'd just be really keen to go along, just to see what would happen!”

Many years later, the now 24-year-old University of Melbourne student is preparing for life on the other end of the stethoscope when she graduates with a Doctor of Medicine at the end of 2019. She’s been able to complete her postgraduate studies in her hometown at the University’s Shepparton campus, which means plenty of hands-on practical work in her local community, and Krystal believes that has made the experience even more valuable.

“People were really welcoming, especially once you told them you are from the area; people get pretty excited about that. Just something they can relate to you with, which is really nice. They’re always happy to have country kids back in the area. So it was really surreal to be in the hospital as a soon-to-be-doctor rather than just wishing for it all those years ago.

“Even knowing what a regional town is like gives you an advantage, let alone being from that regional town itself, so it was good coming back to a familiar space. There was no transition for me. It was just settling back into normal life, but going to uni at the same time. It was really nice knowing the place, knowing the people, having support systems there, which I think was obviously an advantage. Just having people around that I knew, knowing my environment and just feeling comfortable in the place I was in. I think all of those things really gave me an advantage in just being able to settle in and actually focus on what I was doing and get the results I needed to get from the year,” she said.

After growing up in Shepparton where her family has always lived, she went to Shepparton High School before spending four years in Melbourne to complete her Bachelor of Science at the University of Melbourne. But she knew the country was always going to be home.

The University’s Shepparton campus is home to its Department of Rural Health, set up in 1999 to help improve the availability and quality of health care in regional Victoria. Two decades later, Krystal is just one of thousands of young students to go through its doors.

“Everything's been really amazing. I couldn't imagine a better university experience really, just from financial help to social support to just the assistance they've given me, and the ability they've given me to get to the career I want. I can't really put into words how lucky I feel that I've been able to go through university and have all these opportunities granted to me,” Krystal said.

For now, Krystal still has a few months until graduation, followed by a short break (which will include her upcoming wedding), but it’s her first year as a practising rural doctor that has her most excited.

“I'm going to be working as an intern doctor at Northeast Health Wangaratta for next year. They've got a rural community intern training program. So it allows you to do some rotations in the hospital and some rotations in rural general practice, which is kind of the pathway I'm leaning towards. It's quite unique and it just gives me the opportunity to spend a little bit more time in general practice and really see if that's the kind of pathway I want to take,” Krystal said.

“I'm keen to stay in the country. I'm never going to be someone who goes to the city to work. I think I want to be a rural doctor. I think you can make much more of a difference, you can have much more of an impact on the community and you can be quite engaged with it at the same time. I've no idea where I'll be in five years, but I know it'll still be in the country somewhere, practising,” she said, speaking at all times with a maturity beyond her 24 years.

A remarkable young woman and doctor-in-the-making, that maturity is also evident when Krystal talks about giving back to her community, and not just as a doctor.

“As soon as I moved back to Shepparton, I got involved with tutoring kids and volunteering for the Smith Family and just trying to give back. People just giving up their own spare time made quite a big difference to me, so I think it's important to do that.

“I've volunteered with Teach for Australia and AIM throughout uni. I think that's quite important to maintain. I've needed help from other people, so I think it's only fair that I give that help back in any way that I can. But also I've done ballet since I was a little kid, so I've kept that up throughout uni. I've been teaching ballet, I tutor, I have 11 kids I tutor at the moment. I don't know how that's happened,” she laughed.

As Krystal edges ever closer to fulfilling her childhood dreams, her advice for others following in her footsteps is simple:

“Don't ever rule anything out. I didn't know about all these things when I was in high school and I just feel so lucky to have come through with all this support and be able to do it in the rural town that I was from, and still get success from that. And I would say to people just don't be afraid to ask others above you for help. So many of my peers and all the people that I know are so happy to help those people that are coming up and struggling through the same pathway. So I'd encourage people to just ask for help and look for the resources because they are out there, if you ask for them. And people in this field are just so helpful and keen to help others learn and succeed.”