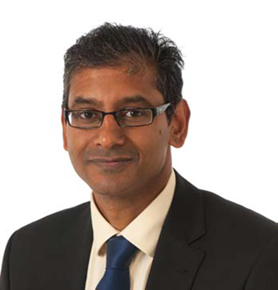 Professor Sarath Ranganathan has recently been appointed as the Head of the Department of Paediatrics.

Professor Ranganathan is an experienced paediatric respiratory physician, medical researcher and teacher with an impressive international record. Last year he was elected an inaugural Fellow of the American Thoracic Society for international leadership in paediatric pulmonology. Throughout his esteemed career he has received awards from the British Paediatric Respiratory Society, the Cystic Fibrosis Trust UK, and in 2016 he was awarded the Cystic Fibrosis Australia Patrons Award by the Governor General, Sir Peter Cosgrove.

Professor Ranganathan completed medical school at Sheffield University (UK) and undertook specialist training at the Royal Brompton, Great Ormond Street and the Queen Elizabeth Hospitals in London (UK). He completed his PhD focused on lung function in infants with cystic fibrosis at the University College, University of London (UK). His first consultancy (2004) in paediatric respiratory medicine at the Royal Children’s Hospital (Melbourne, Australia) was where he described the first use of endobronchial ultrasound with transbronchial needle aspiration in a child. In 2008, he was appointed a Senior Lecturer in Paediatrics at the Brighton and Sussex Medical School (UK) before returning to the Royal Children’s Hospital (Melbourne) in 2010 where he became the Director of Respiratory and Sleep Medicine in 2012.

Professor Ranganathan will assume the role of Head of the Department of Paediatrics in early March which he will hold in conjunction with a continuing leadership role in Respiratory Medicine in the Hospital.