When she discovered there was no culturally appropriate tool to measure Aboriginal and Torres Strait Islander infant development, Dr Anita D’Aprano and her collaborators developed one. 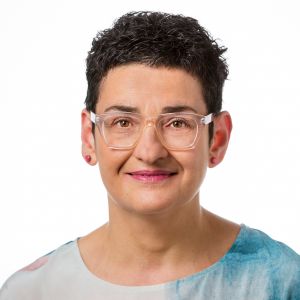 Dr Anita D’Aprano (MBBS 1993) knew from a young age that she wanted to help children reach their potential. As a child, she was intrigued when her best friend’s mum took the baby they were fostering, who had Down Syndrome, to see a paediatrician.

“I’d never heard of a paediatrician,” she says. “And when she explained what that was, I remember thinking ‘I want to do that!’. While I did entertain other careers, it was always around children and their development.”

Now a paediatrician working with children who have developmental difficulties, and a University of Melbourne Senior Indigenous Child Health Research Fellow, Dr D’Aprano was born and raised in Melbourne with Italian heritage.

An avid reader, she was fascinated by infant and child development. “Having a niece born with a disability also gave me privileged insight into the lived experience of the child, caregivers, and the family,” she says.

The reading paid off when Dr D’Aprano was accepted to study medicine at the University of Melbourne, where she cemented her vocation, met lifelong friends, and began her journey as a clinician and researcher.

Discovering a disparity in screening

After training in developmental paediatrics and child and adolescent psychiatry, she learned on a trip to the Northern Territory that there were no appropriate developmental screening tools for Aboriginal and Torres Strait Islander infants.

Early detection of problems is vital for minimising long-term issues and maximising each child’s potential. Dr D’Aprano witnessed health inequities that saw some babies and children miss out on vital screening. The experience was life changing.

“I went up to the Northern Territory in 2008, initially on a six-month sabbatical from my clinical work at the Royal Children’s Hospital in Melbourne,” she explains. “It turned into a four-year stay and [led to me] embarking on a research path.”

Determined to improve the situation, Dr D’Aprano began a PhD in Indigenous Child Health through the Menzies School of Health Research at Charles Darwin University, which she completed in 2014. Her goal was simple: “The earlier we detect these difficulties, the earlier we can provide support for young children to improve their long-term health and wellbeing.”

Working with local Aboriginal communities and services, and supported by the Northern Territory Government and the Lowitja Institute, Dr D’Aprano modified the mainstream Ages & Stages Questionnaires® (ASQ®-3) screening tool, which sees parents and carers, guided by health professionals and educators, track a child’s progress from one month to five and a half years.

“Using a culturally adapted tool also addresses something communities have been telling us is needed – it’s respectful and the right thing to do,” Dr D’Aprano says. “It shows we’re listening to what communities see as important.”

The ASQ-TRAK tool features simple English, culturally relevant tasks and illustrations. It is administered by interview rather than caregivers completing it alone.

“In some communities that were not using any developmental screening tools prior to the ASQ-TRAK, the ASQ-TRAK data is now providing specific evidence of the developmental need, which is enabling access to the NDIS. This means it is having a direct impact on young Aboriginal children, [helping them] access the support they need for their developmental difficulties.”

Mainstream and Aboriginal Community Controlled Health Services across the Northern Territory, Western Australia and South Australia now use the ASQ-TRAK for all Aboriginal and Torres Strait Islander children as part of routine, well-child checks.

“It’s been rolled out in a few areas, giving Aboriginal and Torres Strait Islander families the choice to have the ASQ-TRAK used in place of the mainstream version that it’s derived from,” Dr D’Aprano says.

Dr D’Aprano is back in Melbourne working as a paediatrician at the Royal Children’s Hospital and Banyule Community Health. She spends half her time on research projects, including ASQ-TRAK.

She is also developing another new tool, ASQ-STEPS, which measures the effectiveness of early childhood programs by looking at a child’s development progress. Supported by the Northern Territory Department of Education, this research is in partnership with Central Australian Aboriginal Congress and Nunkuwarrin Yunti of South Australia Inc. Importantly, the project is guided by an Indigenous Reference Group.

The growing team now includes an Aboriginal research assistant and a new University of Melbourne Department of Paediatrics Indigenous PhD scholarship, further cementing the confidence families have in the program. It all means more engaging and effective screening in some of our most vulnerable communities.

“Being able to engage families is a really critical part of developmental screening,” Dr D’Aprano says. “The cultural safety makes a big difference. I suspect that it would be of relevance to other indigenous populations around the world.”

COVID made it more difficult to conduct screening, which needs to be delivered in person. Through a grant from the (then) Victorian Department of Health and Human Services, Dr D’Aprano grew her training team and supported ASQ-TRAK training in different areas across Australia, resulting in a potentially improved delivery model.

When she wasn’t walking her border collie cross Lucie, learning how to forage for edible weeds and perfecting handmade pasta with her mum, Dr D’Aprano spent much of lockdown working to enhance the program, which is already having an impact.

“Parents in urban, regional and remote areas tells us the same thing: it is educational, and strengths based; they report feeling ‘proud’ to see their child complete the activities,” she says.

“It is important to identify areas needing support, but this tool also recognises the child’s abilities. Too often we focus on ‘deficit’ when it comes to Aboriginal and Torres Strait Islander health. The ASQ-TRAK is a tool that promotes celebrating the child’s success.”