Professor Julie Bines’ work on a novel neonatal rotavirus vaccine is set to provide a better future for children around the world. 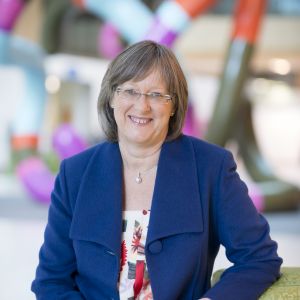 Professor Julie Bines, Department of Paediatrics, University of Melbourne, is a paediatric gastroenterologist at the Royal Children's Hospital in Melbourne. She leads the Enteric Diseases Group and the RV3 Rotavirus Vaccine Program at the Murdoch Children's Research Institute.

She inherited more than 40 years of discovery and research on rotavirus. She is now poised to realise a shared dream of introducing a novel neonatal rotavirus vaccine in Indonesia and providing a better future for all children.

A pioneer and the power of collaboration

Professor Julie Bines (MD 2000) was always on a science trajectory. “I was always inquisitive about the role of science and research and answering questions that mattered,” she says.

She only ever considered a career in medicine, but she wasn’t focused on a subspecialty until her residency at the Royal Children’s Hospital. During that time, she travelled throughout Asia, Africa and Europe for 12 months, which clarified her future career pathway.

“I was struck by the disparity in healthcare and the potential to contribute. I saw a lot of confronting things, and when I came back, I decided to do paediatrics.”

“Children are the future of the world … if we were able to give them a good start in life, free from disease, [with] good nutrition and opportunities to learn, then that would be a good contribution to the wellbeing of the world,” Professor Bines says.

Professor Bines was surrounded by incredible mentors at the Royal Children’s Hospital in the 1980s, who encouraged her to pursue a career in gastroenterology. It was an auspicious time to enter the Department of Gastroenterology where rotavirus, the most common cause of acute dehydrating gastroenteritis in children aged less than five years, was discovered in 1973.

Most of the children admitted to the hospital in the 1970s presented with diarrhea with no known cause. Professor Ruth Bishop (BSc 1954, MSc 1958, PhD 1961, DSc 1979, DMedSc 2009) took biopsies taken from the small bowel of these babies and examined them in Professor Ian Holmes’ laboratory at the University of Melbourne. Together, they identified round viral particles that were eventually called rotavirus.

“It seemed like there was a natural immunisation that occurred due to infection with this unusual type of rotavirus within the nurseries,” she says.

Vaccine development in partnership with Indonesia

Professor Bines and her team developed this unique strain (RV3) into a vaccine called the RV3-BB to prevent gastroenteritis from birth. The ‘BB’ notation is in recognition of Bishop and Barnes for their seminal contribution to the rotavirus research journey.

Clinical trials have been completed in four countries (Australia, New Zealand, Indonesia and Malawi) and in a four-decade long partnership with Indonesian collaborators, RV3-BB is set to be introduced into the Indonesian National Immunisation Program in 2023.

“We have licensed the RV3-BB vaccine to BioFarma, which is the Indonesian Government manufacturer that produces the regular routine vaccinations for children in Indonesia. They are developing it as a halal vaccine so it’s suitable for their population and meets their cultural needs,” Professor Bines says.

Today, there are approximately 4.5 million babies born each year in Indonesia that do not have access to a rotavirus vaccine. Professor Bines is eager to see RV3-BB address this significant healthcare gap.

“We always want to be there faster, because being there faster means you save more babies; however, it will be an incredibly satisfying moment. The success will be the success of our Indonesian collaborators, Professor Yati Soenarto and her wonderful team at Universitas Gadjah Mada, and the Indonesian commitment to do this,” she says.

Towards a global rotavirus vaccine

Despite being recommended by the World Health Organization (WHO), approximately 45 per cent or 70 million of the world’s children do not receive a rotavirus vaccine. Many of those are in the poorest countries of the world.

BioFarma plans to first serve Indonesian children, then increase capacity for global production by obtaining WHO prequalification for their RV3-BB vaccine. This prequalification is how groups like UNICEF access the supply chain.

“We see RV3-BB as a global vaccine to address what is a global problem. Developing an effective, affordable vaccine that can be delivered early to protect these babies is going to be important if we're going to target that unmet need and the gap in protection that is around the world still for rotavirus disease,” Professor Bines says.

The team have also licensed RV3-BB to two manufactures in China. They envisage attracting other collaborations with vaccine manufacturers in the future.

Creating a better future for all children

Professor Bines was recently awarded the Australian Museum Eureka Prize for Infectious Disease Research and feels honoured to realise the 1970s dream that discovery might lead to prevention and improved protection with a rotavirus vaccine.

She is committed to further building healthcare research capacity in the region. She is currently working with Indonesian colleagues on COVID-19 wastewater surveillance and through Partnership in Research Indonesia and Melbourne (PRIME), working on understanding the impact of ‘long COVID’ in children in Indonesia.

Professor Bines is also a founding member of Women in Global Health and is the current chair for the Australian Chapter.

“The COVID pandemic has had a disproportional impact on women and girls in a lot of countries. Now there is a global network of people interested in gender equity and addressing this from a global health lens of how the pandemic has affected women in their trajectory and opportunity for equality,” she says.