Bid to recognise silent epidemic that affects one in three

The University of Melbourne is leading a push for Australia to recognise sarcopenia, a muscle-wasting disease that affects one in three people globally over the age of 60. 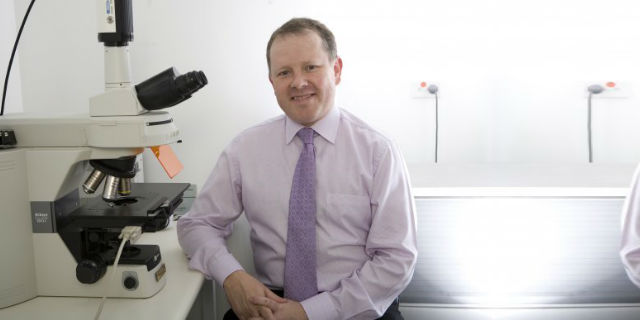 Australia’s leading expert on the condition Professor Gustavo Duque says while it is common knowledge we lose muscle mass as we age, doctors don’t know how much is normal, and are often ignorant of the condition.

“Sarcopenia is to muscles what osteoporosis is to bones, yet our knowledge of the condition is where osteoporosis was in the 1950s,” said Professor Duque, who is Director of the Australian Institute for Musculoskeletal Science (AIMSS).

Research shows sarcopenia leads to a higher risk of fractures and falls, and is associated with diabetes, obesity, chronic kidney failure, heart failure, vitamin D deficiency, and in men, loss of testosterone.

Sarcopenia sufferer Ross Albiston, 85, was diagnosed  less than a year ago and uses a walking stick in and outside his home at a Melbourne retirement village.

“I feel insecure about falling, even when I’m sitting down, and my feet tingle because the nerves in my lower legs have been damaged.”

“It’s only in recent years that we know that muscle mass is not necessarily correlated with strength or performance, and this is a critical insight as we look for drugs to treat this condition,” he said.

In conjunction with the University of Melbourne, Victoria University and Western Health, AIMSS organised Australia’s first conference on the condition, which took place in Melbourne on 11-12 November. Five international experts presented at the conference as guest speakers together with more than 30 national experts in the field. The most important outcome of this meeting was the creation of the Australian and New Zealand Society for Sarcopenia and Frailty Research, which will be based at AIMSS under Professor Duque’s lead.

Professor Duque is a member of an international consortium formed in 2010 that has been working on clinical guidelines and diagnostic criteria. In October this year, as a result of this work, sarcopenia was allocated its own code in the World Health Organization’s International Classification of Diseases (ICD-10-CM)

“The lack of classification means that until now, there has been no agreed ‘normal’ rate of age-related muscle loss to benchmark against, no clinical guidelines for doctors to diagnose or treat it, and many are unaware it even exists,” Professor Duque said.

Recognition here will require a new code in the Australian ICD-10-AM.

“Sarcopenia really is a disease with an identity crisis, but we are working to change that over the next few months,” Professor Duque said.