Each year, 8 MD 3 students embark on an adventure of a life time where they attend, from January, the Oslo exchange. The students who are selected complete their Women's and Kid's Health term and immerse themselves not only into their studies but the Norwegian culture and lifestyle.

As described by Tim Papas it is an enriching and life changing experience. Our students also play an important role as Ambassadors for the Melbourne Medical School and The University of Melbourne. Tim's piece offers a student viewpoint of what the students were up to on the other side of the world. 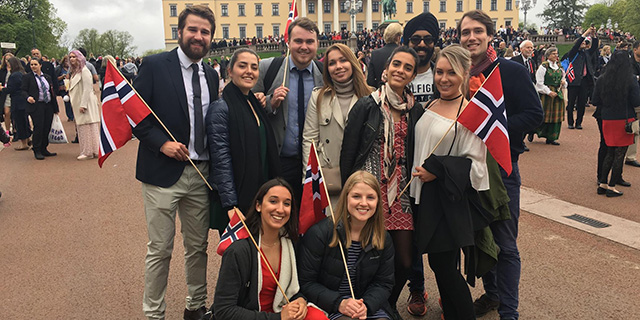 Oslo reflections - a semester to remember

From February through to June of this year, myself and 7 other medical students from the University of Melbourne underwent an exchange semester at the Universitetet i Oslo medical school, completing rotations in Obstetrics, Gynaecology and Paediatrics.  The 8 of us joined the 9th semester of the Norwegian 6-year MD course and were joined by 30 other international students from many different countries.

The semester, thankfully taught in English, proved to be one of the most rewarding, enjoyable and gratifying experiences of not just our education, but likely our careers and entire lives too.

Oslo, indeed all of Norway is a strange place. It is about as far from Melbourne as you can possibly be on the planet – geographically of course, but also culturally, historically and socially.  At times, it can be frustrating or even infuriating.  The city basically shuts down on Sundays – few shops are open, fewer public transport services run and the population of Oslo dwindles, leaving it essentially a ghost town – as all Norwegians disappear into the wilderness to their cabins that they all seem to own.  This also applies to public holidays, which spring up regularly and with no warning, often leaving the short-sighted international students with poorly stocked refrigerators to trudge through the snow to the local McDonald’s, which thankfully was always open in times of great need.  Combined with an incredibly high cost of living (roughly $9AUD for a decent coffee – of which medical students go through a bit of), it can be a vexing place to live.

But Norway is a place of extremes.  Extreme natural beauty, extreme weather, extreme daylight hours (midnight study sessions or alternatively, midnight parties under blazing sunlight). Like these extremes, the frustrations are outweighed tenfold by extremes in the opposite direction. The infrastructure and social welfare are second to none, boasting completely free, state of the art healthcare, 13 months of paid maternity and paternity leave and endless other benefits that doubtlessly contribute to Norwegians being some of the happiest people on the planet.  The lifestyle is heavily influenced by the outdoors, regardless of the season. In the winter, sledding, cross country and downhill skiing dominate a Norwegian’s spare time – all within 20 minutes on the metro train from the centre of Oslo. In the spring and summer, they hike, run, picnic, go on cabin trips or simply lie in the sun on all available patches of grass in every park or street corner.  It doesn’t take long for an exchange student to adapt and take to this lifestyle like a duck to water.

The curriculum lines up roughly (if not slightly lighter) than the respective semester in Melbourne.  The teaching was of a more relaxed and approachable style, but of a similar quality.  The clinicians were friendly, helpful and endlessly excited to be sharing their knowledge and skills with students from around the globe.  In addition to the somewhat universal medical knowledge we obtained, what we were taught ranged from the subtle disparities in legislation globally regarding abortion and pre-natal screening, to vast differences in the diagnostic and investigative technique between countries.  In addition, experiencing the inner-workings of hospitals in Norway placed us in situations we would have never encountered and learnt from otherwise.   For example – knowing the affirmations and reassurances shouted by Norwegian midwives to Norwegian mothers delivering Norwegian babies (Flot! Kjempe bra! comm a lit!).

The depth of experience is hard to measure, but if you were inclined to do so, the medical knowledge and clinical exposure acquired is inseparable from the other non-medical experiences we had.  Weekends and holidays gave us the opportunity to explore Norway, taking to the snowfields on skis (a bonafide religion in Norway), hiking precarious trails perched on ridges above crystal blue fjords, or enjoying the indescribable comfort of a wood-fire heated cabin and a hot tub filled by hand pumped water from a natural stream while snow fills the surrounding woods.  Our proximity to Europe meant weekend trips to Sweden, Denmark, Spain, Portugal, France, Germany, Poland, the Baltics and countless other European destinations were never out of the question.  The international community of an exchange semester brought with it more than just colleagues and contacts from every corner of the planet, but lifelong friends, with promises of couches to sleep on and home cooked meals wherever we go.

Back home and now settling into our next semester, our time in Oslo seems to have flown by in a heartbeat.  But the memories, experiences, personal growth and friends we have made will be with us for the rest of our lives.