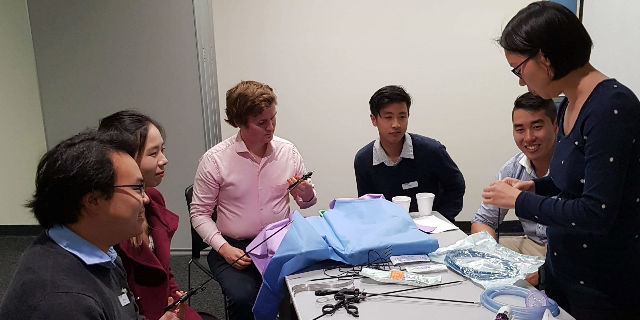 Introduction to Laparoscopy was the inaugural event for the Students Surgical Society of Melbourne at the Western Clinical School, which was held on the evening of the 1st April 2019. Run in conjunction with the Department of Surgery with the support from Associate Professor Justin Yeung, the event featured opening talks on the history of laparoscopy, its importance in modern surgical practice, as well as the indications and complications of performing laparoscopy in clinical practice.

Following these presentations, the students broke into three groups which rotated through different hands-on practical skills stations. The first station was training on laparoscopic simulators where students' manual dexterity were tested, followed by a discussion of the various tools and implements used in laparoscopic surgery.

Finally, students were given the opportunity to gain practice in accessing the abdomen through simulating an open hasson technique, as well as had the opportunity in introducing a laparoscopic trocar through a mock abdominal wall. In all, the event was an exciting showcase of what was expected of junior surgeons.