An aunt’s battle with schizophrenia inspires a career in psychiatry

Inspired by his aunt's illness, Professor Christos Pantelis has pursued a career in schizophrenia research in the hope of discovering better treatment for sufferers. 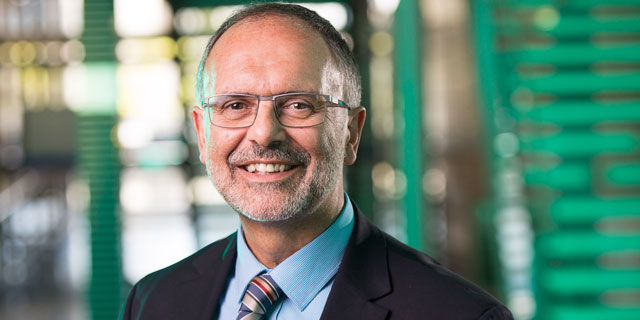 My parents emigrated from Greece to settle in Australia in the early 1950s, first my father Nicholas (Nikolaos) in 1951 and my mother Dimitra followed three years later. Together with my siblings, Betty and Spiros, we all grew up in Moonee Ponds and we lived between two adjoining Victorian single fronted homes. We lived in one house while my father’s parents and his sister lived in the other. We spent a lot of time moving between the two houses, with my grandparents and aunt looking after us while my parents worked. My parents were dedicated to supporting my father’s sister, Paraskevi, who suffered with schizophrenia.

When Paraskevi arrived in Melbourne, she worked as a seamstress. Her name translates to Friday, which led to her Australian friends adapting her name to ‘Freda’, which was considerably easier to pronounce. My own family adopted her ‘Australian’ name, Auntie Freda, and liked the connection to her Greek name.  Paraskevi was a loving aunt and was always devoted to her brother Nicholas and his family. She was warm, engaging, quite humorous, and was always spoiling us. However, the symptoms of her schizophrenia would torment her, and at times these caused her and those around her a great deal of grief.

Onset of schizophrenia
Born in Rhodes, Greece in 1924, Paraskevi began displaying symptoms of the condition in her 20s, which is very typical of this illness. During the early phase of her illness she suffered acute episodes of schizophrenia that were distressing for her and for her family. She received treatment in Greece, including antipsychotic medications, which she found distressing. She first came to Australia at the time I was born in 1955. My parents helped her greatly and sought ways to help improve her life. She would confide to my mother about her experiences, but otherwise kept these experiences to herself. She learned to manage the condition reasonably well despite experiencing persecutory voices (auditory hallucinations) that she believed came from all around the neighbourhood, and believing that organisations, including from Russia, were behind it all (persecutory delusional ideas). These symptoms are very typical of schizophrenia and, unfortunately, people do not understand that they are caused by mental illness, as was the case for my auntie.

Soon after I was born, Paraskevi began to include me in these delusional ideas, though this was in a positive sense. She believed she was protecting me from these malevolent forces. Most people who knew Paraskevi were not aware that she was unwell and that she felt persecuted in this way. She lived a quiet life, focused on her family and because she functioned well in the community, she remained unmedicated for almost 50 years. This was despite various attempts for her to receive treatment. My parents initially struggled to understand her illness and they tried hard to provide her with as normal a life as possible. I see this same struggle and trauma in the parents of many of my patients, even after their children have been unwell for many years. Professor Christos Pantelis with his aunt Paraskevi circa 1970s.

Pursuing a career in psychiatry
Encouraged by my parents, I did well academically and attended Melbourne High School for my final four years of secondary education. I always had a love for research from a very early age. After graduation, I studied medicine at The University of Melbourne. My parents held the university in very high regard so they were very pleased with my decision to study here. I rapidly became passionate about studying psychology and psychiatry, finding the field fascinating.

After finishing medicine at St Vincent’s Hospital, and working there for two years, I travelled to Europe to spend time in Greece and to travel. Thanks to Professor Richard Ball, who was then head of psychiatry at St Vincent’s Hospital, I had the opportunity to visit psychiatrists and attend a conference in Finland. This led to an introduction to psychiatrists from the UK, including Professor Anthony Mann from the Royal Free Hospital and the Institute of Psychiatry in London. I subsequently went to London and started training in psychiatry at the Royal Free Hospital. Apart from some visits home to Melbourne, I lived in the UK for almost 10 years.

Schizophrenia research
I first started research while I was training, taking an 18-month research registrar position to undertake a large study of all those suffering with schizophrenia in inner London in 1985 (the Camden Schizophrenia Surveys). Dr Patrick Campbell was a caring and devoted psychiatrist who helped me develop this work, together with others, including Professor Carol Harvey (also a Professor of Psychiatry at University of Melbourne). This was fascinating work, because I was able to see the full range of the disorder – from the most severely unwell to those who were functioning reasonably well in the community. I also saw and interviewed those who were homeless and in prison. The insights gained from seeing more than 300 people suffering with schizophrenia led me to think about what was happening in the brains of patients with this disorder. I started to develop my ideas about how to understand this illness and I have pursued these ideas ever since.

In 1987, I was appointed lecturer at Charing Cross and Westminster Medical School, working closely with Professor Thomas Barnes (psychiatrist) and Dr Hazel Nelson (neuropsychologist), who were inspirational mentors. The work developed there led to collaborations with Professor Trevor Robbins at Cambridge University and to the work that led to my doctoral thesis on the neuropsychology of schizophrenia.

In 1992, I was awarded the Royal College of Psychiatry Lilly Travelling Fellowship and a Travel Fellowship from the King Edward's Hospital Fund for London. This provided me with a unique opportunity to work with international leaders in schizophrenia research involved in brain imaging, including Dr Richard Coppola and Dr Daniel Weinberger at the National Institute of Mental Health (NIMH) in Washington DC. During this time abroad, I developed my expertise in brain scanning, which provided me with the tools to examine the brains of patients with schizophrenia.

Back to Melbourne
During my time in London, I met my wife Kimberley, who was also from Moonee Ponds; we married just before I took up my fellowships to visit Washington DC. We returned to Melbourne later that year. Our three children got to know their family on both sides, including my aunt Paraskevi. They thought Paraskevi was ‘cute’ and they always referred to her as Aunt Freda. Unfortunately, my parents had died too young to meet my children: my father at the age of 59 in 1980, soon after I finished medicine, and my mother in 1989 also aged 59. After my mother died, my sister helped to support Paraskevi until I returned from overseas.

On returning to Melbourne at the end of 1992, I began working at the Mental Health Research Institute (MHRI) and at Royal Park Psychiatric Hospital. I established imaging and neuropsychological research in schizophrenia at the MHRI, supported by Professor David Copolov (Director of MHRI), and Professor Bruce Singh (Cato Professor of Psychiatry at RMH). I established the Cognitive Neuropsychiatry Research Unit, which was initially based at the MHRI until 2000, and then at Sunshine Hospital. We also worked closely with Professors Patrick McGorry and Alison Yung in the early days when they were developing their strategy for identifying young people at clinical high risk for developing psychosis (including schizophrenia). My group established some of the first neuropsychological and brain imaging studies in this area, leading to world first research about brain changes as young people developed these disorders for the first time.

My clinical work at Royal Park Hospital with A/Prof Norman James and Mr Gary Monkley (now Area Manager at Mid West Area Mental health Service) led to establishing models of care for patients with chronic mental disorders. After moving to Sunshine Hospital in 2000, we established the Adult Mental Health Rehabilitation Unit (AMHRU), which has grown to become a premier centre for rehabilitation in schizophrenia and has a great culture and very impressive clinical staff. We manage patients with complex and challenging needs, always striving to make a difference to their lives.

In 2004, I was appointed as Foundation Professor of Neuropsychiatry and, together with Professor Dennis Velakoulis, we established the Melbourne Neuropsychiatry Centre (MNC), which is a joint centre of The University of Melbourne and NorthWestern Mental Health (Melbourne Health). Our centre has clinical and research bases at Sunshine Hospital, the University of Melbourne and Royal Melbourne Hospital. MNC has more than 60 people, including clinicians, neuroscientists, engineers, and students, postdoctoral fellows and international fellows across a number of disciplines. Working closely with enthusiastic young people is exciting and we are constantly developing novel ideas and research. We have established collaborations across the globe to tackle complex mental health problems, including schizophrenia, autism, anxiety and mood disorders, and neurodegenerative disorders affecting younger people. Working closely with Professor Ian Everall (current Cato Professor of Psychiatry and Head of Department at The University of Melbourne) and team we are exploring the neuropathology and genetics of schizophrenia. Recently, we have forged links with engineering and pharmacology colleagues, including Professor Stan Skafidas (Director, Centre for Neural Engineering, University of Melbourne) and Professor Arthur Christopoulos (Monash Institute of Pharmaceutical Sciences, Monash University), leading to novel ways to approach and treat these disorders. This is a very exciting time to be working in this field, with the hope that we can make a difference to the lives of people suffering with this illness and for their families.

My aunt Paraskevi died in 2014 at the age of 90, which is unusual as many with severe mental health die prematurely. Her condition meant that she faced enormous difficulties but she also experienced periods of contentment and happiness especially when her brother and family were close to her. And she was very loved. Seeing her distress up close as a child was clearly influential on my choice of career and my drive to understand the illness and to produce the best outcomes for those affected by severe mental disorders.

Nikolaos and Dimitra Pantelis Travelling Scholarship
My wife, Kimberley, and I have established a travelling scholarship in my parents’ names for a young researcher at The University of Melbourne studying schizophrenia to attend an international conference and present their findings. The ‘Nikolaos and Dimitra Pantelis Travelling Scholarship’ is a tribute to my late parents who, as well as being devoted in their care for Paraskevi, encouraged me and my siblings to achieve academically. Knowing that there is a scholarship in their name would make them extremely happy. I was lucky enough to receive travelling fellowships early in my career and I am very pleased now to be able to assist a young researcher in their pursuit of improved treatments for schizophrenia. Nikolaos and Dimitra Pantelis circa 1950s.