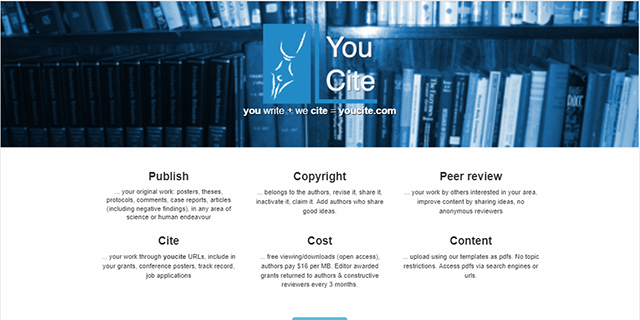 Scientists created YouCite based on frustration with two things:

A brief history of scientific publishing...

Initially, there were paper journals. Authors provided descriptions of their work (ie scientific content) and journals published these, retaining copyright for their work, and charging subscriptions to readers including institutional libraries. Life was simple.

Then there were reviewers. These were considered experts in relevant fields (chosen by the editors) and their anonymous comments no doubt helped improve content. They did reviews as a "noble obligation" (unpaid). Content quality improved.

General and specialty journals proliferated as scientific content increased. Readers could choose to read specific journals of interest in their fields. Keeping up with content was possible.

Some journals distinguished themselves, claiming prestige based on selection criteria, and quality of content. Career scientists competed for publication in these journals. Grants were awarded both on perceived quality and quantity of publications. Rules for scientific advancement were clear.

... but then things went wrong

Journals began to venture online attempting to adapt to the new opportunities of the internet. Initial skepticism that such journals could be profitable, disappeared rapidly due to highly profitable commercial publishing models (eg Plos One).

Typically, an online journal solicits authored articles and coopts relevant unpaid reviewers whose criticisms are addressed by the authors, such that the article is rejected, or accepted for a fee (which varies in specific ways). Reading of abstracts (or part of articles) is usually without charge, but obtaining full articles is typically fee-based (with institutional discounts). Some journals, typically those regarded as the highest quality, retain the original model (no charge to authors, subscription charges to readers or institutions) but these are rapidly changing as the companies behind them realise the potential profits.

The costs charged to authors for publishing their content in online journals has escalated far beyond the actual cost of putting pdfs on servers. Reflect for a moment what publishers are now doing. They charge typically US$1500-3500 per accepted article. Sure, there are costs to set up online article processing systems, ORCID, DOI and URL support, but subsequent storage and delivery costs are minimal for accepted articles. And many journals appear now to be using the same processing systems, suggesting that profit margins are even more outrageous. And who bears these costs - authors and their institutions (and their grants).

For some reason, journals still retain the copyright of articles! In what other business transaction, do you pay to give away your intellectual property? This might have made sense when they published a journal using paper and collected money to fund the printing and distribution, but is it fair now?

Reviewers are still co-opted to provide their expert reviews for free. Journal editors play upon a reviewer's sense of noble obligation, with entreaties such as:

I would value your opinion on the following article...

Yet, to have high quality reviews, you need appropriately qualified and experienced scientists in the field of the scientific content of the article. In what other business, are consultants of the highest quality requested to do their work for free?

Many of us, and our scientific colleagues, are tiring of doing so much unpaid work. There is no formal method of ascribing academic or track record benefit to reviewers for doing such reviews. Academic funding is scarce, and institutional appointments are busy with teaching and our own research responsibilities (protocols, grant writing, ethics, grant administration and more grant writing) as well as the research itself. Fewer scientists are tenured, and hence do not have the luxury of doing pro bono work for commercial (and profitable) businesses or their editors who masquerade as content promoters.

And reviewers remain anonymous. This had led to unforeseen and unfair consequences. It is increasing clear that the quality of reviewers, particularly in the fledgling online journals, is deteriorating. As journals proliferate, so does their need for reviewers. Senior scientists are increasingly refusing to review, leading to more junior scientists, and those that have other reasons, for accepting. We have been surprised by reviewers rejecting articles presumably in their area, because of additional work that in their opinion should have been done, statistical methods that are not to their liking, or data that is apparently already in press (but not available publicly) in other articles. And some act as if they are potential competitors attempting to delay or reject articles.

There are also now so many reviewer inspired changes to articles, that they take far longer to be accepted and published than in the past (6-9 months is not unusual). And journals may take weeks-months to reject an article, adding further delays if the group decides to submit to another journal. Would it not be more timely and representative of the work of a scientist or their group, if they were allowed to publish their original thoughts for others in the wider community of scientific peers to judge, instead of a randomly chosen, possibly competing, small subset of reviewers? Useful scientific content should ideally stimulate vigorous debate amongst a broad base of other interested scientists.

What about our junior scientists’ work? At present, it is likely to take 6-12 or more months to navigate the submission, review, correction and publication cycle. Such articles may not be available for post-doctoral job or grant applications (which typically only consider "in press" or published articles). Surely, we want to encourage them to publish their work rapidly to promote their careers, as well as for our eager consumption.

And only some scientific content reaches the journals. Articles reporting negative findings are not popular, so are rarely accepted, yet remain of great importance in advancing scientific methods. Protocols, theses (honors, masters, doctoral) are rarely available (in part due to intellectual property concerns) yet should be, since they often contain more detailed discussions of emerging topics of great scientific value.

Finally, there is ever diminishing money available to scientists. It often seems as if we are spending more time on writing grants (often unsuccessfully) than doing the research that we love. And the funding bodies are increasingly proscriptive about how money can be spent.

A recent example edict was that research must be published in open access journals (noble indeed) but specifically prohibited grant budgeting for online journal fees! Fortunately, this has been re-thought, however within this environment, the increasing pillage of our scarce budgets by commercial companies’ intent on excessive profit margins, is just another blow to the productivity of scientists. Here is a novel idea: why not allow scientists to publish journal content at reasonable prices and return excess money as grants if there are profits? Could that work?

Scientists at the University of Melbourne through collaborative discussions (often heated) have come up with a novel solution to the above problems. These ideas have now been launched via a new journal “youcite.com” which incorporates the following innovations.

1. Authors can publish rapidly and inexpensively

YouCite allows authors to upload their finished articles as pdfs which are immediately available online. The cost of publication should cover realistic disc space storage costs (currently ~$16 per MB) with some to spare. Once online, authors can then include these articles in their CV, grant and job applications immediately (including immediately promoting the work of junior or emerging scientists).

Authors retain copyright of their work. This means they can update their articles (e.g. if they have new data, or collaborate with new authors or reviewers) or can inactivate it if they wish to publish elsewhere (or have derivative work accepted in journals which they consider more prestigious). YouCite will retain a reference to the work so if a linked URL is clicked in an existing article, the viewer will be notified. Articles become a living document rather than a static one. Dates of submission can be used as proof of IP generation. As a word of caution though, authors should ensure their institutions have signed off on publication before uploading to YouCite.

Articles are available online for free and can be found using Google or other search engines. They can be viewed or downloaded as pdfs without charge. Open access satisfies grant publication guidelines without exorbitant fees charged by commercial journals. In time, it is hoped that YouCite articles will be listed on PubMed as well. Negative articles in particular should help interested researchers avoid unfruitful approaches, and suggest ways of improving promising approaches.

Constructive peer review is a cornerstone of scientific advancement. YouCite encourages open non-anonymous peer review by scientists interested in that particular area (who must be registered with ORCID). It is hoped this will foster collaborative and constructive comments that will allow authors to improve their articles. It may also allow authors to decide to add reviewers to subsequent iterations of their articles (further improving content and giving credit, where due, to reviewers). It is also hoped that authors will spend just as much time in writing (and fixing) their articles prior to submissions as they do now, since clearly poorly written articles will be there for all to see. Naming reviewers (identified by their ORCID iD) should discourage vindictive and unhelpful criticisms. Authors can flag unhelpful criticisms for highlighting, which will presumably be to the detriment of the reviewer not the author. There are also conditions of use of YouCite that can lead to articles being removed if authors breach these.

YouCite allows publication of content in any area of science or human endeavour. Specialty journals are an out-dated concept in the age of Google searches and PubMed. They add administrative costs and journal burden upon scientists trying to keep up to date in their areas, and profits for commercial publishers (e.g. by packaged subscription models).

6. Grants for authors and reviewers!

Funding is currently too hard to get! YouCite aims to promote science by awarding grants to authors of submitted articles, and reviewers who make constructive comments (as determined by authors). Overall grants aim to be at least 80% of income obtained. They will be awarded by the youcite.com editors and can be used for anything the awardee wishes. Of course, it is hoped that they would be used for furthering research and science.  As revenue increases, merit-based grants may also be able to be awarded.

Already some of the features of youcite.com have emerged on the internet (eg physics archives, biorxiv.org) and there is a lot of discussion about better ways of promoting scientific advances. YouCite is one attempt that will hopefully expand as scientists (called “citists” on YouCite) publish their work in YouCite. For example, posters can be uploaded as pdfs prior to a conference, and a YouCite URL used by interested viewers to download the pdf without the need for handouts. As more citists publish, grant awards will increase, more science will be done, and commercial publishers exploitation will become a thing of the past.

Please go to youcite.com to learn more, register and submit your articles, posters, and theses!