Associate Professor Forbes McGain, member of the Department of Critical Care and an intensive care physician and anaesthetist at Western Health, alongside Professor Jason Monty, Head of the University’s Department of Mechanical Engineering are the co-recipients of ATSE's Clunies Ross Knowledge Commercialisation Award. 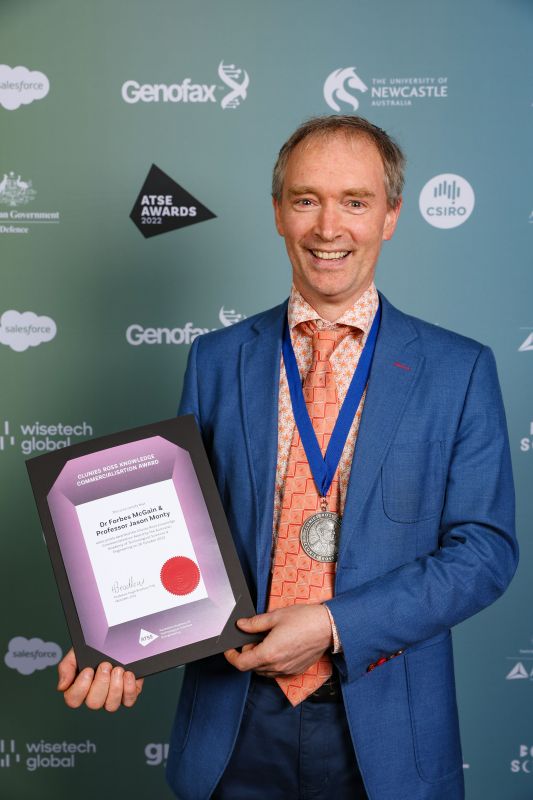 In March 2020,  during the peak of COVID-19, Forbes contacted Jason asking for assistance in protecting the safety of healthcare workers attending to patients infected with COVID-19. Forbes’ idea was for something like a pram’s rain hood that could be placed over the head and torso of an infected patient to contain the virus particles.

Despite the short timeframe of less than 12 months, this unique collaboration resulted in the creation of the Medihood. A device which protects healthcare workers from infections by containing and filtering the infectious air expelled by a patient, while also improving patient outcomes.

Forbes and Jason directed a team including colleagues from the University of Melbourne departments of Mechanical Engineering, Earth Sciences, and Infectious Diseases, along with medical, nursing, and physiotherapy specialists from Western Health, and additional experts from CSIRO’s Oceans and Atmosphere team and the Doherty Institute for Infection and Immunity.

In addition, Melbourne-based flag manufacturer Evan Evans was appointed product development and commercialisation partner, convinced of the efficiencies it could achieve by re-purposing its flag-making technology to manufacture the Medihood.

Through these collaborations, the multi-award-winning Medihood has been adopted internationally and  used in more than 145 hospitals around Australia.