Claire Salter Parry from Going Rural Health, shares the story of the Mooroopna Primary Schools Speech Pathology Program and explains why it is so important for early learning and development.

When asked about the term Speech Therapist or Speech Pathologist, most of us have a narrow definition of that occupation.

Perhaps we went to school with someone who needed a speech therapist? They were mysteriously called out of class and returned an hour later. Or there was that other kid in the class who had a stutter. How was that person fixed?

But Speech Pathologists do so much more than ‘fix-up’ speech. Language skills are a key to learning and to better health outcomes and the University Department of Rural Health (UDRH) at Shepparton has recognised this and responded.

According to the Speech Pathology Australia, “Speech pathologists’ study, diagnose and treat communication disorders, including difficulties with speaking, listening, understanding language, reading, writing, social skills, stuttering and using voice. They work with people who have difficulty communicating because of developmental delays, stroke, brain injuries, learning disability, intellectual disability, cerebral palsy, dementia and hearing loss, as well as other problems that can affect speech and language. People who experience difficulties swallowing food and drink safely can also be helped by a speech pathologist.”

Claire Salter Parry is a trained Speech Pathologist and currently employed by the University Department of Rural Health in the Going Rural Health team. Though born in Shepparton and now based there, she has worked and travelled extensively. Her work took her to the Northern Territory, Northern Queensland and then in Cambodia working for a Not for Profit organisation. In Cambodia, she led a team to develop a curriculum framework for a university course in speech pathology and established a clinic providing speech pathology and occupational therapy services to Cambodian and expat families.

Since re-locating to Shepparton, Claire has coordinated a program of work where speech therapy is embedded into the early year’s curriculum in some local primary schools. Designed originally in 2019, the pilot program was well-received, resulting in it being expanded three primary schools and a kindergarten, and being able to involve up to 24 speech pathology students per year. This whole of class approach is fast gathering support. 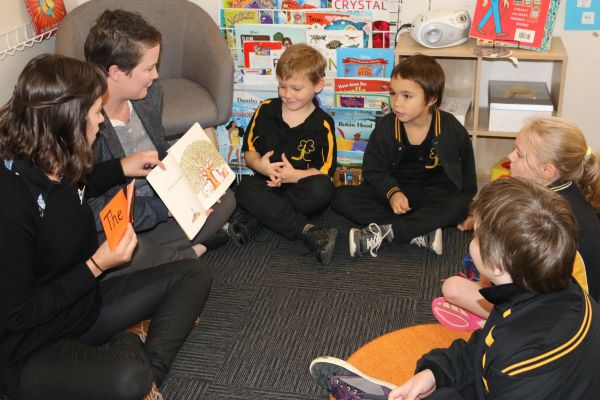 “Early intervention is crucial, and we know that delays in language development can create profound challenges for children. Language is key to learning and emotional regulation. Without the tools of basic communication, children can fall through the cracks and end up being left behind.”

“By being involved at the kindergarten level, we can screen the children earlier and follow them as they progress to primary school,” she said.

Claire coordinates the supervision of undergraduate and Master’s degree students from a number of Universities; Australian Catholic University, La Trobe University and Charles Sturt University and the University of Melbourne. They are allocated to one of the three Mooroopna schools as a part of their clinical placement and work closely with school students and staff to support the speech, language and literacy skills of students.

Prior to the program, schools indicated that some of the children are two years behind developmentally before they even begin formal schooling. While there is not enough robust data at present, it is known that many of the children come from low socio-economic areas and may have experienced early life trauma.

“Trauma can impact a child’s cognitive development so early intervention can be a means of providing children with the support they need to communicate effectively, which then paves the way for them to learn to read and write”.

With the generous support of the Greater Shepparton Foundation, the program has been able to expand to three primary schools and so far, one kindergarten, with more in the pipeline.

“There may come a time when a range of allied health professionals become a part of the school. We are already seeing improvements in some of the children and we know this approach works and gives children a step up.”

University of Melbourne, Faculty of Medicine, Dentistry and Health Sciences