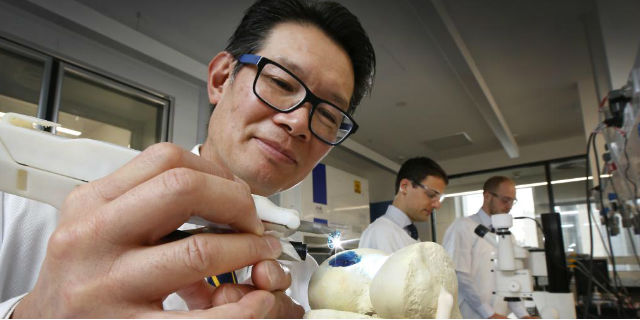 The team behind The Biopen, made up of researchers from University of Melbourne Department of Surgery, St Vincent’s Hospital Melbourne, the University of Wollongong and the ARC Centre of Excellence for Electromaterials Science (ACES) have been named as finalists for the prestigious UNSW Eureka Prize for Excellence in Interdisciplinary Scientific Research for their cutting-edge handheld 3D printing device.

This collaboration draws upon the diverse skills of materials scientists, cell biologists, mechatronic engineers and clinicians to develop a handheld 3D printer, ‘the Biopen’, which can be used in surgery to repair damaged cartilage.

St Vincent’s Hospital orthopaedic surgeon Professor Peter Choong said the technique could be adapted to treat a range of conditions in humans.

“Although we have used this primarily for cartilage, we can already see how this can be used in a variety of other clinical situations.”

The nominated team is lead by Director of Orthopaedics Hospital at St Vincent’s Melbourne and Professor of Surgery, Professor Peter Choong and ACES Director Professor Gordon Wallace. The remainder of the team consists of Dr Claudia Di Bella, Dr Stephen Beirne, Dr Cathal O’Connell and Dr Zhilian Yue. These talented scientists will find out if they have taken out the title at the award dinner on Wednesday 30 August.

The UNSW Eureka Prize for Excellence in Interdisciplinary Scientific Research is presented to an individual or team who has produced a groundbreaking research outcome that was only possible as a result of the integration of two or more unrelated disciplines.