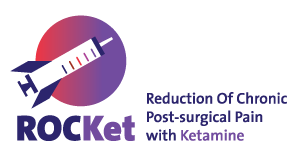 A 5-year, 4,884 patient, multicentre, double-blind, placebo controlled, phase 3/4 randomised controlled trial of the effect of up to 72 hours of perioperative ketamine on the risk of development of chronic post-surgical pain (CPSP).

Chronic post-surgical pain (CPSP) is now known to be one of the most common and debilitating postoperative complications, occurring in around 12% of patients, a year or more after a wide range of major surgery. Even the lower estimates of CPSP rates mean many tens of thousands of patients each year developing CPSP in Australia. The likely recurrent cost to the community is around $3 billion per year.

Treatments to prevent CPSP have had generally disappointing results. The underlying mechanisms are complex, involving development of central hypersensitivity and spinal cord “wind-up”. It is known that the N-methyl D-aspartate (NMDA) receptor plays a key role in this process. A recent comprehensive Cochrane review of several pharmacological interventions found that only intravenous ketamine showed evidence of a potential benefit in reducing CPSP incidence (risk ratio 0.63, p=0.001). The authors cautioned that large study data was lacking.

Ketamine is a well known NMDA antagonist approved for anaesthetic use, most commonly used now as a second or third line treatment for acute postoperative pain because of its excellent analgesic properties. The ROCKet Study is a large Phase 3/4 multicentre randomized double-blind placebo-controlled trial in 4,884 patients undergoing abdominal, thoracic or major joint surgery to determine whether CPSP is reduced by 25% or more using peri-operative IV ketamine at typical analgesic dose rates. The methodology for data collection has been successfully used by us in previous large, multicentre, long-term follow-up trials, and a protocol for this study has been successfully piloted in 3 Victorian hospitals.

Given the limited efficacy of and access to treatments for established chronic pain, primary prevention of CPSP is of paramount importance. Demonstrated clinical effectiveness would readily translate into widespread change in routine anaesthesia practice worldwide, with enormous benefits to healthcare costs and quality of life.