A malignant glioma is a type of brain cancer which caused approximately 2.3% of cancer-related deaths in the USA with over 22,000 new patients expected annually. In Australia, approximately 2000 people are expected to be diagnosed with this brain cancer and about 1500 people will die. The most prevalent and aggressive form of glioma and the tumour with the worst prognosis is the glioblastoma multiforme (GBM, WHO grade IV). The prognosis for patients with GBM tumours remains poor with a median survival of only 14.6 months, after receiving the current standard treatment consisting of surgery, radiotherapy and temozolomide. The neurologically destructive characteristic of all gliomas is their extensive infiltration of the normal brain tissue, which thwarts efforts to completely remove or ablate these malignant cells.

A property shared by several types of tumour cells is the ability to form structures known as invadopodia, which drive the invasive ability of brain cancer cells. These are dynamic actin-dependent, membrane protrusions which proteolytically degrade extracellular matrix (ECM) substrates via the activities of numerous proteases. We have observed invadopodia in glioma cell lines and primary tumour cells derived from ex vivo cultured GBM specimens, suggesting a role for invadopodia in glioma invasion. Importantly, through the analysis of patient tissue, we have identified that invadopodia regulators may be of prognostic significance.

Invadopodia formation and function are dependent on multiple proteins and signalling pathways. Therefore, understanding the mechanisms and processes involved in the regulation and control of invadopodia and how these are affected by therapy is crucial in discovering anti-invasive therapies. Our research strategy involves various project arms including, but not limited to : (i) exploring the role of a number of invadopodia regulators in brain cancer, (ii) the repurposing of FDA-approved drugs not previously used for brain cancer to enhance current treatments in combating invadopodia activity and brain cancer invasion, (iii) the role of extracellular vesicles such as exosomes in the regulation of brain cancer invadopodia formation/activity and response to therapy. Our collaborations with clinicians and scientists further complement the techniques and technology available for our research program. 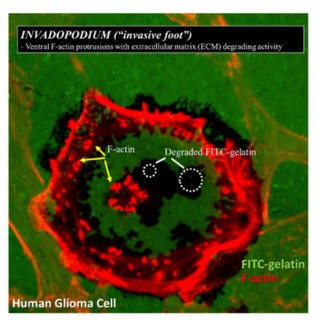 Aneurysmal subarachnoid haemorrhage (aSAH) involves leakage of blood into the subarachnoid space which is secondary to the rupture of an aneurysm. In Australia, the incidence of aSAH is estimated at 10.3 cases per 100,000 persons per year. It has also been predicted that 450,000 to 1.4 million people may harbour unruptured aneurysms with over 2200 of these leading to an aneurysmal bleed very year. The outcome for patients with aneurysmal SAH is generally very poor as it is associated with a high mortality rate and an increased loss of productive years in patients younger than 65 years of age.

Cerebral vasospasm (CV) is a common complication after aSAH. Of the 2200 Australian patients suffering an aneurysmal bleed every year, approximately one third of these people will be affected by symptomatic CV, which can lead to the development of additional focal neurologic deficits causing secondary strokes and ultimately death. The precise mechanisms contributing to the development and progression of CV remain unknown, although factors such as vascular inflammation, smoking and hypertension have been implicated as influencing factors. Data generated from laboratory-based studies are providing evidence that molecular regulatory processes may also contribute to the formation and rupture of aneurysms. However, as there are no established and reliable physiological biomarkers that may be used in diagnosis, progression of CV and ultimately, outcome prediction. There is an urgent need to identify potentially important molecules that can allow for the early detection and treatment of CV.

The aim of this on-going to study is to comprehensively screen cerebrospinal fluid (CSF) samples from SAH patients with / without CV and determine if there is a distinct set of biomarkers between patients who develop CV to those who do not develop vasospasm. Identification of a 'signature' following the development and progression of CV, will potentially allow for tailoring the subsequent clinical management a patient in the future.

We have established a comprehensive database of biochemical, clinical and radiological data linked to CSF samples that have been collected. Our initial proteomics analysis has identified a number of proteins that may have predictive as well as therapeutic value. A pilot miRNA study of CSF samples identified 4 miRNA being differentially expressed between SAH patients who develop CV to those that do not develop CV. This is now being expanded into a larger study to validate the initial findings.

The successful functioning of all tissues depends on the establishment of a structured, mature vascular (blood vessel) network. As such, the development of new blood vessels (angiogenesis) plays a critical role in healthy human development. Angiogenesis is vital for successful organ growth and also an important requirement for wound healing and tissue repair. In contrast to the healthy state, a number of human diseases including cancer show an unregulated excess of new blood vessel formation. The main purpose of the new blood vessel formation is to ensure a rich vascular supply providing nutrients and oxygen required for continuing tumour growth. Many attempts have been made to inhibit this process as a means to ‘choke off’ the supply of nutrients and oxygen to tumours. However, the unyielding drive for angiogenesis results in a tumour vascular network that is highly abnormal when compared to the organized structure of vessel networks in normal tissues. The haphazard and bizarre distribution of vessels leads to heterogeneous blood flow, sluggish in some regions and excessive in others, resulting in marked tumour permeability with excess extravasation of fluid and protein outside the vessel. This leakiness coupled with the compressive force applied by the growing mass of tumour cells cause vascular compression, an abnormal blood vessel network and a hypoxic environment. Importantly, since anti-cancer drugs are carried to tumours by the bloodstream, abnormal blood vessels structure also hampers efficient delivery of the drugs directly to the tumour.

This project which was instigated by our collaborators, Professor Helen Danesh-Meyer and Professor Colin Green (University of Auckland, New Zealand) involves the study of Connexins in brain tumour vasculature. Connexins (also known as gap junction proteins) are a family of structurally related proteins that exist in the membranes of cells that assemble to initially form hemichannels, which later combine further to form gap junctions. These gap junctions are essential for many physiological processes including endothelial cell function in blood vessel membranes. There is evidence that connexin hemichannels play a role in mediating loss of endothelial cells, ultimately damaging the vascular wall through an efflux of ions and a simultaneous influx of water causing cell swelling and loss. Connexin43 is a gap junction protein expressed in astrocytes and vascular endothelial cells.

Professor Danesh-Meyer and Professor Green have developed a connexin43 mimetic peptide strategy that can modulate the gap junction channels through attenuation of connexin43 expression in these cells. Therefore, reversal of the abnormalities, through the ‘normalizing’ and improved integrity of the tumour blood vessel system by treatment with the connexin43 peptides would ultimately lead to improved delivery of anticancer therapies directly to the tumour and also limit the off-target side effects.

Publications are listed on ResearchGate