Emeritus Professor Gabriel Andrew Kune was a peaceful yet energetic man of extraordinary self-discipline who held great love and compassion for all those around him. 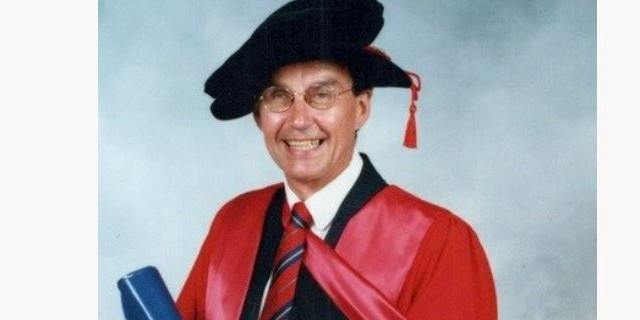 Gabriel (also known as Bill) (MBBS 1957, MD 1988) was foundation Professor of Surgery and Head of Department at the Department of Surgery, Heidelberg Repatriation General Hospital, from 1977 to 1988, and Emeritus Professor from 1989 until his passing in October last year. Gabriel spent his life committed to improving the health of others, which he furthered through surgery, teaching, research, writing and his own passions for sport and diet. He was a peaceful yet energetic man of extraordinary self-discipline who held great love and compassion for all those around him. He displayed great generosity with his time, energy and spirit and always did so with a great sense of humour.

Gabriel was born in the ethnically Hungarian provincial town of Košice in Eastern Slovakia in 1933. His family emigrated to Australia in 1948 and he commenced schooling at Melbourne Boys High School in Year 9. It was at Melbourne High that he first called himself Bill to integrate into Australian society. Despite his initial lack of English, he excelled at school and then university and graduated from the University of Melbourne with an MBBS in 1957.

From 1958 to 1962, Gabriel worked at the Royal Melbourne Hospital and became a Fellow of the Royal Australasian College of Surgeons in 1962. In 1960 while a junior resident, he wrote his first scientific paper with Sir Bill Hughes entitled ‘Fatal Post-operative Pancreatitis’.

Gabriel then travelled to England, where he worked in London at St Mary’s Hospital in 1963 and Guy’s Hospital in 1964. He became a Fellow of the Royal College of Surgeons in 1964. In 1965, he travelled to Boston, Massachusetts to work as first assistant surgeon to Ken Warren at the Lahey Clinic. Gabriel subsequently became a Fellow of the American College of Surgeons before returning to Australia in 1966.

Gabriel’s special interest early in his career lay in surgery of the gall bladder, bile duct, pancreas and liver. Between 1966 and 1976, he practised as a surgeon, taught, researched and gave lectures, including as Arris and Gale Lecturer and Hunterian Professor at the Royal College of Surgeons in London.

He published his first book in 1972, Current Practice of Biliary Surgery. The book launched his career nationally and internationally as a hepatobiliary surgeon. He lectured and was visiting Professor to universities and hospitals across Australia and the globe.

Gabriel was Professor of Surgery and Head of Department at Heidelberg Repat for 11 years. There, he continued his surgical specialisation, travelled, researched and published widely.  In 1980, with Avni Sali, he co-authored a second edition of his book, retitled The Practice of Biliary Surgery. It was translated into Italian and Japanese.

In the early 1980s, he devised The Melbourne Colorectal Cancer Study, a 20-year study of colorectal cancer risk in Melbourne. This work, which only ended 10 years ago, was a great joy and passion of his research career and Gabriel described it as his magnum opus. The study achieved some amazing results, including many Australian and world firsts. One world first, since confirmed many times around the world, showed that the regular use of aspirin is highly protective against colorectal cancer.

After ‘retirement’, he initially took up medico-legal work, focusing on occupational cancers for workplace and veterans’ compensation. He then began to write for non-medical and medical audiences, including publishing four books on cancer prevention. Over the course of his working life, Gabriel authored seven books, 28 chapters in multi-author books and over 250 published articles.