Ruth Bishop’s name will forever be linked with the discovery of rotavirus in 1973 – one of the most common causes of death from gastroenteritis in infants worldwide. By the 1970s the virus was estimated to kill more than 500,000 children each year. Ruth and her colleagues not only discovered this lethal virus, but she also contributed enormously to the development of vaccines to prevent the serious effects.

Rotavirus vaccination is now recommended by the WHO for all children. Since 2008, every Australian child has received an oral rotavirus vaccine, and by the time of Ruth’s death in 2022, it was included in the routine childhood immunisation schedule in more than 60 countries.

Ruth was born to loving parents and grew up in Frankston. Her parents were educated – her father was a Gallipoli veteran and headmaster, and her mother had an MA in French.

Ruth was quick, intelligent, resilient, generous and friendly and she was a hard worker, even from a young age. At the age of eight she raised a pound for War Relief, and she was a prefect and the captain of a sports team.

Though she excelled in science, most girls in her class left school to marry. Ruth began a ‘teaching degree’ in science – at that time there were few means to devote to a girl at university. But when Ruth was 20, she and three other family members together won the Paterson’s Family Quiz on 3KZ. With part of her prize money, Ruth was able to self-fund an honours degree in science.

Her first job was in the Department of Surgery at the Royal Melbourne Hospital, working with Professor Maurice Ewing on gut bacteria.  She was then a bacteriologist, not a virologist.

Ruth went to Liverpool with her obstetrician husband, Geoff Bishop, and their three young children from 1962 to 1965, but she still found time to be a Research Fellow in the Department of Surgery at the hospital where Geoff was working. 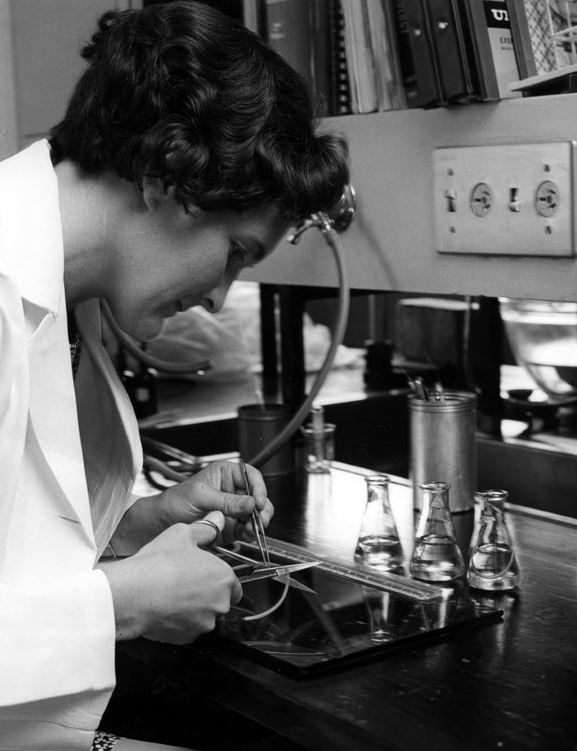 In 1968, Ruth was recruited by Professor Charlotte Anderson as Research Assistant in the Gastroenterology Research Unit, and so began her lifetime association with the Royal Children’s Hospital (RCH).

Professor Anderson was the first paediatric gastroenterologist in Australia and one of the first world-wide. The department, like others in the early days of sub-specialisation in child health, was a research department. Ruth assisted ‘Charlo’, as she was known, with her pioneering studies on chronic diarrhoea in children, including cystic fibrosis and coeliac disease. This was at a time when the difference between those conditions was unclear.

Ruth became familiar with analysing the results from small bowel biopsies, adapted for children by Dr Rudge Townley, Director of Gastroenterology, which later proved to be the pivotal test leading to the discovery of Rotavirus.

Acute diarrhoea was of great concern to gastroenterologists, so Ruth agreed to apply her bacteriology skills to try to find the elusive cause. Dr Graeme Barnes joined the gastro department in 1971, exploring possible causes of gastroenteritis.

A lot of work done by Ruth using her meticulous bacteriology skills virtually excluded bacteria. However, the site of pathology was shown to be the small bowel, not stomach or large bowel.

Ruth noted the severity of damage in the small bowel and felt deeply that it was where the search should be focused.

The RCH did not have an electron microscope at that time, but she pursued her idea that there might be a virus causing the damage. She discussed her idea with Dr Ian Holmes at the Department of Microbiology, University of Melbourne. Specimens were examined by Dr Holmes and Dr Brian Ruck at the University of Melbourne and a new virus was discovered in six of the nine samples.

Recognition of rotavirus in faeces became possible and, with Research Fellow Dr Geoff Davidson, Ruth started a prospective 15-month survey of all children admitted to RCH with gastroenteritis. Rotavirus caused gastroenteritis in more than 50 per cent of the 378 children admitted.  Cases where the cause was known went up to 73 per cent in 1974, from only 12 per cent in 1972. This finding was then rapidly confirmed in Birmingham, Washington and Toronto.

Soon afterwards, Ruth met Dr Yati Soenarto in Indonesia, who has collaborated with the Melbourne Children’s Campus ever since. Her study in Yogyakarta, reported in 1981, showed that rotavirus was also the most common cause of gastroenteritis in Indonesian children. It soon became clear that rotavirus infection was the most common cause of severe dehydrating diarrhoea in children worldwide.

Could a vaccine be developed for this virus?

Ruth and then-Research Fellow, Dr Don Cameron, found that many healthy full-term newborns in Melbourne obstetric hospitals were excreting a unique strain of rotavirus (RV3). Graeme Barnes returned to Melbourne in 1975, and the team conducted a three-year follow-up of infected neonates, versus those who were known not to be infected during the first weeks of life. It showed they were protected against the severe effects of community outbreaks of rotavirus.

The RV3 vaccine is based on this unusual neonatal rotavirus strain. The RV3-BB vaccine, named after Ruth Bishop and Graeme Barnes, is a modified version of the original vaccine with the first dose administered at birth. It has been successfully trialled in Melbourne, New Zealand, Indonesia and Malawi by Professor Julie Bines, who now leads the team.

The vaccine is likely to be introduced into the Indonesian infant immunisation schedule in 2023. It is hoped the vaccine will further help reduce deaths due to rotavirus gastroenteritis, which have already fallen from more than 500,000 per year to 200,000 per year using current rotavirus vaccines.

Throughout several decades Ruth trained and mentored a large number of scientists and was keen to give credit to her staff. She held many important roles and positions nationally and internationally, wrote and contributed to many journal articles, and demonstrated collaboration and sharing of knowledge.

Ruth was much better known overseas than in Australia. Dr Roger Glass from the Centre for Disease Control in Atlanta labelled her ‘The Icon of Rotavirus’.  She held many roles with the WHO and was a member of the Rotavirus Working Group for the Bill and Melinda Gates Children’s Vaccine Program. Bill Gates has published a statement that Ruth Bishop’s work was a catalyst for him and his wife Melinda to set up their foundation.

In 2019, Ruth was appointed Companion of the Order of Australia (AC), which replaced her AO (1996). She smiled when her staff called her Lady Bishop. Along the way, there were so many other awards and recognitions that she accepted with grace and gratitude.

PS:  The RCH no longer needs a special ward for children with gastroenteritis.

Adapted from Eulogies presented by Professor Graeme Barnes and Professor Tim Bishop at Ruth Bishop’s Memorial Service on 24th May 2022.

Tom Bishop is Ruth’s son. He is a Professor of English at the University of Auckland |Waipapa Taumata Rau.